Angie DeRosa | Staff Arianna Sarmiento gets a book from Gwen Samuel, founder of the Connecticut Parents Union. Buy this photo 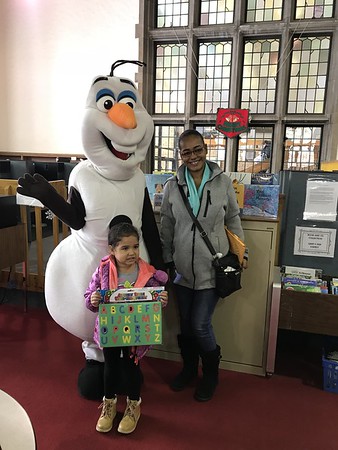 Kairalys, 4, poses for a photo with her mother Desiree Classan and Olaf at the New Britain Public Library. Photo by Angie DeRosa | Staff Buy this photo

Arianna, 3, stands with her father Nestor Sarmiento with Olaf at the New Britain Public Library. Photo by Angie DeRosa | Staff Buy this photo

Free books were given out to children by the Connecticut Parents Union at the New Britain Public Library on Friday. Photo by Angie DeRosa | Staff Buy this photo

NEW BRITAIN - The Parent Express‚Äô ‚ÄúTis the Season to be Reading‚Äù bus tour made a stop at the New Britain Public Library Friday to give away books to children in need.

The bus is decorated as a mobile classroom, with posters in English and Spanish spreading positive messages and educational information.

Gwen Samuel, founder of the Connecticut Parents Union, started the bus tour six years ago as a way to spread empowerment and holiday cheer.

Each December, the Parent Express visits 10 cities for three days, giving away 1,000 books.

In 2012, days before the tour was scheduled to start, the shootings at Sandy Hook Elementary School took place.

Samuel decided to change that year‚Äôs format, and the bus became the ‚ÄúCoping and Caring Parent Express‚Äù - dedicated to promoting healing.

Samuel said everyone made cards and grief counselors were on hand. In addition, she said, she received an abundance of books that year from authors and publishers who wanted to help.

‚ÄúIt‚Äôs about community and empowerment despite income or race. It puts a face to education and brings it to the most vulnerable population.

She added that hats, gloves and scarves also have been distributed.

Aboard the bus are three high school seniors who volunteer with her, including her son, Elijah Adonai.

‚ÄúIt‚Äôs a great way to give back to the community who don‚Äôt get to have these experiences,‚Äù Adonai said.

‚ÄúFrom the womb to college, we support them. It‚Äôs about meeting children where they are,‚Äù Samuel said. ‚ÄúAll children matter.‚Äù

Older youth get assistance with job applications and registering how to vote. Boys get free ties and help in learning how to tie them.

‚ÄúEverything is so tense right now in terms of politics,‚Äù Samuel said. ‚ÄúPeople are always saying children are the future, but what are we doing today?‚Äù

Aside from learning the ABC‚Äôs and 123, Samuel said the Parent Express teaches character building and how to be productive citizens.

What she learns from the children and talking to their parents, Samuel also brings to lawmakers to make sure they‚Äôre meeting children‚Äôs needs.

‚ÄúAt the end of the day, we have to do better for children.‚Äù