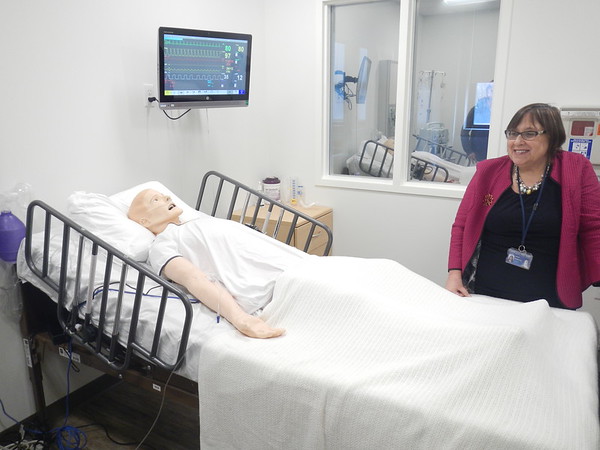 “We can mess up here and be OK, but in the real world we have to be on our ‘A’ game,” said Jessica LaRose, a CCSU senior, as she gave a tour of the facility.

The 4,770-square-foot space in Copernicus Hall is nearly three times the size of the nursing department’s former home in Barnard Hall, which had only one simulation room.

The $1.1 million renovation to the engineering and science department building creates 10 new offices, an expanded laboratory and six simulation rooms. Each simulation room is dedicated to a different area of health care, including emergency room and home care scenarios.

A few classrooms used by the engineering and science department were relocated to the CCSU library, said Janice Palmer, spokesperson for the university.

“It’s an amazing section, and I think it’s actually going to put Central on the board for nursing,” said Marissa Cardono, a freshman nursing student taking the tour.

The intensive care unit room features a mannequin that can talk, make bowel sounds and have its pupils dilated. It is linked up to a full-health monitor for heart rate, blood pressure and more, as well as a control panel that can change the mannequin’s vital signs based on student’s actions. An infusion machine and EKG machine are also on hand.

“If you have a cardiac arrest, you’d much rather lose a patient in a simulation situation,” said Professor Leona Konieczny.

“It’s really about an opportunity about ‘What did I do well? What could I have done better?’ ” said Dr. Catherine Thomas, chairwoman of the nursing department.

“In the end, we are educating our nursing students to save lives and to cultivate wellness,” said CCSU President Zulma Toro before a ribbon cutting for the center. “In serving our students we serve our communities.”