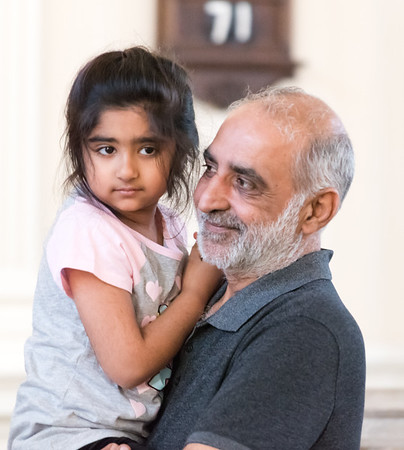 03/22/18 Wesley Bunnell | Staff A press conference was held at the First Congregational Church of Old Lyme on Thursday night in support of Malik Naveed Vin Rehman and Zahida Altaf who have taken sanctuary in the church after being ordered by Customs Engorcement (ICE) to leave the United States by March 19th. Malik walks into church with is 5 year old U.S. citizen daughter Roniya. Buy this photo

03/22/18 Wesley Bunnell | Staff A press conference was held at the First Congregational Church of Old Lyme on Thursday night in support of Malik Naveed Vin Rehman and Zahida Altaf who have taken sanctuary in the church after being ordered by Customs Engorcement (ICE) to leave the United States by March 19th. Malik Naveed Rehman, L, holds 5 year old daughter Roniya who is a U.S. citizen as they stand next to Zahida. Buy this photo

OLD LYME - It has been more than three months since Malik bin Rehman and his wife, Zahida Altaf, took sanctuary in an Old Lyme church to avoid deportation.

The couple has been staying at the First Congregational Church of Old Lyme since March, after federal authorities told them to leave the country. The couple, who own the Pizza Corner on Broad Street, said they’re still waiting for the results of a petition they’ve filed requesting a stay of deportation.

For now, they remain confined to the church to avoid Immigration and Customs Enforcement officers.

“We are in kind of a gold cage inside. We have the whole world inside, but we don’t have the freedom to step outside for fresh air,” Altaf told The Herald on Thursday.

Rehaman and Altaf came to the U.S. from Pakistan legally in 2000 on non-immigrant visas, but stayed past their visas’ expiration dates. They tried for years to extend their visas and become U.S. citizens, but were misled by an immigration attorney who was later jailed for swindling other clients.

Their 5-year-old daughter, Roniya, was born in the country and is an American citizen. She has been staying with family in Wethersfield so she could finish her school year, but now that school is out she can spend more time with her parents.

“She’s getting so depressed about our situation and separation from us,” Altaf said.

Given a date for deportation in March, the church offered sanctuary to the family after their request for an emergency stay was denied.

“It really began during the election cycle after hearing the alarming, despicable rhetoric coming from then-candidate Trump’s campaign,” Jungkei said. “We began formulating some sort of response at that point, but it really kicked into high gear after the election and after the inauguration.

Jungkei said it felt like an obvious move to make the church a sanctuary, and most of the church’s parishioners felt the same way.

Now, members of the church are trying to keep Rehman and Altaf active and content while they’re in sanctuary. Organizers have brought drum lessons, yoga, knitting, English learning classes and community dinners to the couple over the past few months.

“Thankfully, our church community and our wider community have been extremely supportive in really trying to bring the outside world here to the church,” said Lina Tuck, chairwoman of the church’s Immigrant Assistance Committee.

U.S. Sen. Richard Blumenthal, U.S. Sen. Chris Murphy, New Britain Mayor Erin Stewart and the New Britain Common Council have all spoken out in support of the family. Altaf said it was very meaningful to have the support of city officials and other politicians.

“We are not alone in the community,” Altaf said. “They make us feel stronger.”

Their story has even gotten national attention, as Rehman and Altaf’s case was highlighted on a recent episode of “The Opposition with Jordan Klepper,” a satirical news show on Comedy Central. The six-minute clip of the family on the show can be found on YouTube in a video titled “War on ICE: Church Sanctuaries Used as Sanctuaries! - The Opposition w/Jordan Klepper.”

“When they first contacted us we were a little bit scared because it’s a comedy and we have a very serious issue, but they did a really good job,” Altaf said.

Jungkei emphasized that First Congregational Church’s message isn’t necessarily about being “anti” anything: its message is pro-love, pro-friendship and emphasizes togetherness.

Still, the minister criticized those who preach Christianity but don’t practice the same kindness and acceptance that the religion requires.

“A faith tradition that doesn’t have hospitality and compassion and welcome to the stranger or sojourner at its center, at its core, is a deformation of faith,” Jungkei said. “The kinds of things were hearing from Attorney General (Jeff) Sessions right now, I would say, can amount to heresy.”

“This is bigger than a faith-based issue for the congregational church or any church - this is a moral issue and we are morally obligated to do the right thing,” Tuck said. “Turning people away that are in dire circumstances for their lives is not the right thing to do.”