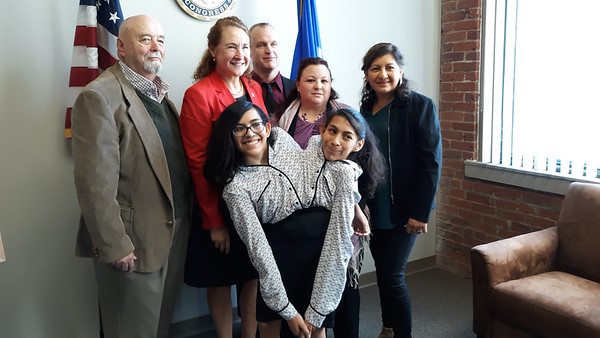 NEW BRITAIN - For city resident and Navy veteran Bill Johnstone, the work of U.S. Rep. Elizabeth Esty, D-5th District, has meant the difference between recognition of the potential cancers brought on by exposure to Agent Orange in Vietnam and no hope for benefits to fight the disease.

For New Milford 18-year-olds Carmen and Lupita Andrade who were born conjoined, Esty’s work has meant the difference between staying in the United States to receive treatment and schooling, or returning to their native Mexico for an uncertain future.

Esty has had an impact on many of the veterans served by the Department of Veterans Affairs in the city of Danbury and has personally helped the department’s director, Danny Hayes, straighten out his own military paperwork so he could receive the benefits of being a veteran of Operation Desert Storm.

“I talked to you guys and within three weeks I got a giant pile of paperwork,” said Hayes, who was able to become designated as honorably discharged from the Army with the help of Esty’s office. “Any of my veterans who had issues, when I passed them on to you, their problems got solved.”

Esty invited a small group from around the 5th District to her New Britain office Monday to discuss how her staff has handled the nearly 7,000 requests for help made by constituents in a variety of areas from Social Security to immigration to veterans’ affairs.

She’ll be leaving office on Jan. 3 after opting not to run for re-election following revelations that she failed to act for months when a staffer alleged being physically abused by her chief of staff. Democrat Jahana Hayes, a political newcomer, won the seat in November.

In some ways it was a bittersweet moment for Esty and people like Johnstone who have relied on her advocacy to deal with private issues that have spring-boarded into calls for legislation that have changed policy for the entire country.

As a result of the constituent services, her office was able to help state residents collect $8 million in Social Security benefits, $3.5 million in veterans benefits, $1 million in Medicare benefits and $900,000 from the Internal Revenue Service.

“This is half the job of being a representative and it’s often overlooked,” Esty said. “It doesn’t make headlines and most people don’t even know about it.”

Johnstone advocates for Blue Water Navy Vietnam veterans who served in Vietnam waters presumed to have been polluted with Agent Orange. He first met Esty three years ago and began to dog her public appearances to raise awareness that the federal Veterans Administration took away any recognition that the pesticide used widely in Vietnam could cause cancer. The move denied veterans of that era benefits for cancer-related illnesses.

“I met her at a library two or three years ago and she said she’d look into it,” Johnstone said. “After that I followed her around because I wanted people to know about the issue.”

Esty helped get a bill unanimously passed in Congress to rectify the recession of the recognition. The U.S. Senate so far has not passed the bill, but there is still hope, Esty said. “We’re still trying to get this done as part of the budget deal,” she said.

“You can sum up Elizabeth Esty in two words,” Johnstone said. “The best.”

Her staff has also continually helped the Andrade twins, who are attending community college to become veterinary technicians for large animals. The diminutive girls with lustrous black hair require medical monitoring every three months even if they are healthy.

Their family must file for a medical visa to stay in the country every six months. They have been here since infancy due to their medical status. Although they are documented, they can’t receive tuition assistance from the federal government due to their immigration status.

“I don’t want to stay illegally,” their mother, Norma Solis, said. “This process takes time. Thanks to Miss Esty I feel more secure.”