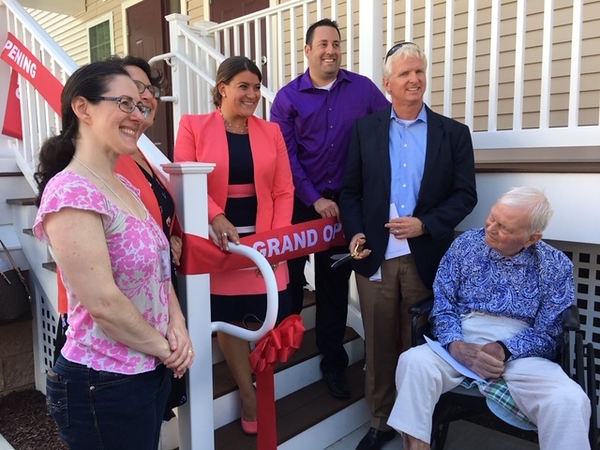 NEW BRITAIN - Greg Howey, a notable manufacturer and humanitarian in the city, died Friday at the age of 76.

Howey was the former president and chairman of New Britain-based OKAY Industries. While being a manufacturer was his day job, Howey’s passion to improve life in the city and help its homeless population was far-reaching.

“He was a terrific humanitarian and a philosopher of manufacturing and practice,” said Rick Mullens, director of Central Connecticut State University’s Institute of Technology & Business Development.

Mullens said he first met Howey in the 1990s through United Way. Mullens remembers Howey as someone who was eager to contribute to the positive growth of the city. Howey always wanted to make a positive impact, Mullens remembered.

“He wasn’t the type of person to sit on the sideline,” Mullens said.

One of those positive impacts was the city’s effort to eliminate homelessness. Howey co-chaired New Britain’s Ten Year Work Plan to End Homelessness in 2007 with former Mayor Tim Stewart, which culminated in the opening of the Howey House Apartments this past August. Howey House is a permanent supportive housing building owned and managed by the Friendship Service Center for those who are chronically, or about to become chronically homeless. Currently, 11 residents live there.

In addition to helping out with the plan, Howey and his wife, Barbara, donated money to fund the project, which cost nearly $3 million. Jason Howey, one of Greg and Barbara Howey’s three children, said his father had an exceptional ability to get other people involved in the causes he supported.

“His key trait in his leadership was the ability to get people to buy-in,” Jason Howey said. “He’s always just been very involved in the community.”

Mayor Erin Stewart shared that sentiment and said Howey was always willing to take a chance on people, including the homeless he hired at his business.

“He’s donated so much time and a lot of money for the effort to end homelessness,” Stewart said.

While Greg Howey called New Britain home for decades, he was actually born and raised in Illinois. Jason Howey said this is where his father got his humanitarian and philanthropic passion.

“It came from my grandfather and his Midwestern upbringing,” Jason Howey said of his father.

Stewart said she is better person for having worked with Greg Howey and that his impact on the city will be felt for years to come.

“Even though he wasn’t from New Britain, his heart was here and he would give anything to help this community,” Stewart said.

Just as Greg Howey’s father, Robert, inspired him, Jason Howey has been inspired to get involved by his own father. Jason Howey is now president of OKAY Industries and keeps the business involved with the greater community.

“You help the hand that feeds you,” Jason Howey said, remembering his father’s message. “I was one of the most lucky people in the world to have him as a father and mentor.”

Funeral services for Greg Howey are scheduled for 10:30 a.m. Thursday at St. Mark’s Episcopal Church, 147 West Main St. Burial will be at the convenience of the family in Hillside Cemetery in Torrington. Calling hours are from 4 To 7 p.m. on Wednesday, Dec. 19, at Carlson Funeral Home, 45 Franklin Square.