02/20/19 Wesley Bunnell | Staff Japanese students, professors and the vice mayor of New Britain's sister city Atsugi, Japan, visited CCSU's campus on Wednesday night to give a presentation on the culture of their home city. Shohoku College students Asuka Yamaguchi and Nene Tamura speak with a visitor at the end of the presentation. Buy this photo 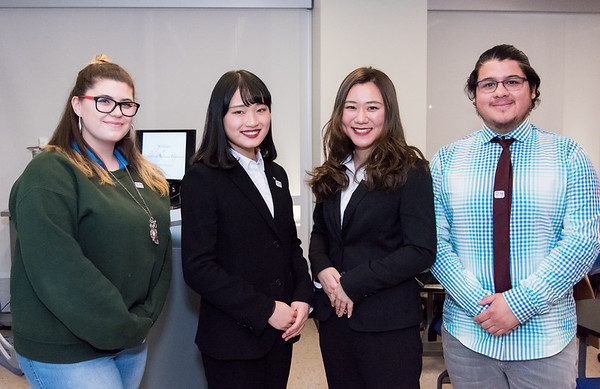 NEW BRITAIN - A delegation from Japan came to the city this week to make connections and try to re-establish a stronger relationship among Central Connecticut State University; New Britain’s sister city of Atsugi, Japan; and Shohoku College.

Their visit was part of New Britain’s Sister Cities program.

New Britain has five sister cities, as designated by Sister Cities International. They are Atsugi, Japan; Pultusk, Poland; Rastatt, Germany; Giannitsa, Greece; and Solarino, Italy. Part of the program’s goal is that people from the sister cities visit each other to get to know the cities’ cultures and create relationships.

Part of the delegation’s trip this week included spending time at Pulaski Middle School, where it met Superintendent of Schools Nancy Sarra.

“Kon’nichiwa! Today we welcome our sister city representatives from Atsugi, Japan,” Stewart wrote in a Facebook post. “Deputy Mayor & students from Shohoku College who gave a wonderful presentation to me about Atsugi. We are so blessed to celebrate 35 years of this friendship, it is important that we continue to cultivate and grow our cities’ connections. The cherry blossom garden on the hill at Walnut Hill Park up by the Shell will be replanted this year in honor of our 35 years of friendship.”

The delegation also toured CCSU and spent time with some of the local students.

The local sister city program started with then-Mayor William McNamara. Zeena Tawfik is the city’s community outreach organizer of the program committee. Gilbert Gigliotti, a CCSU professor is on the committee, too, as well as Gary Robinson, who serves as its secretary.

“We enjoy bringing them here,” Robinson said. “Every once in a while, we get three or four sister cities in town.”

The New Britain Sister City Committee involves the city, CCSU and local businesses. It meets once a month at CCSU.

Part of the goal of the committee is to maintain a relationship with the sister cities.

CCSU students will be going to Greece in March as part of New Britain’s relationship with Giannitsa.