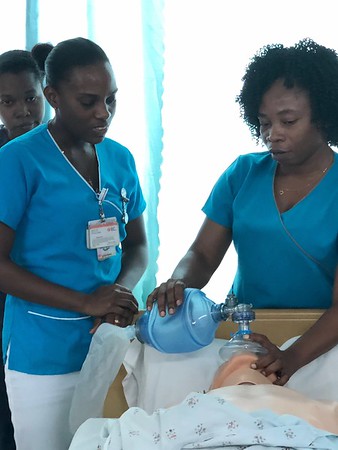 Courtesy of Victor Morrone Nurses practice during a course taught by New Britain EMS in Guyana. Buy this photo 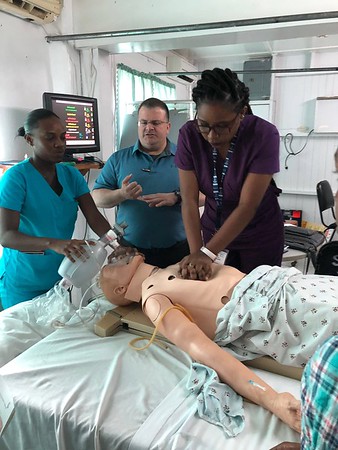 Courtesy of Victor Morrone Victor Morrone, center, of New Britain EMS, oversees nursing instruction in Guyana as part of a program of the University of Saint Joseph in West Hartford and the Pan American Health Organization. Buy this photo 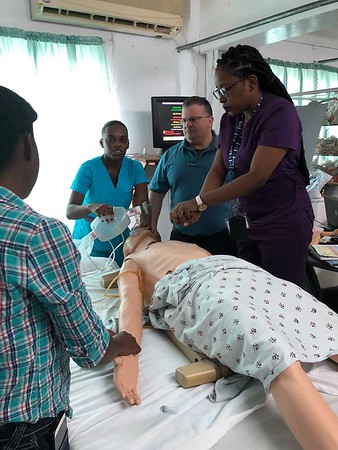 Photo courtesy of Victor Morrone Guyanese nurses during instruction in Guyana that was administered by New Britain EMS as part of a program with University of St. Joseph. Buy this photo 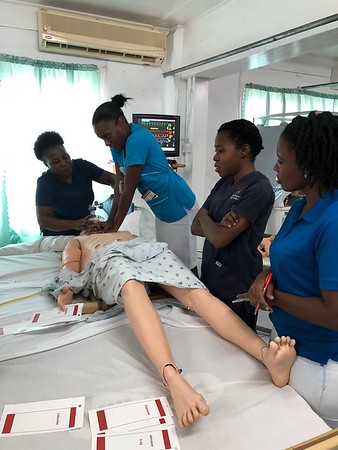 Photo courtesy of Victor Morrone Guyanese nurses during instruction in Guyana that was administered by New Britain EMS as part of a program with University of St. Joseph. Buy this photo

NEW BRITAIN – On an average day in this city, emergency medical services personnel respond to a variety of calls.

But when two of them learned of a need for medical training in South America, they were ready to help.

Victor Morrone and Kristen Farrell, from New Britain Emergency Medical Services, recently made a trip to Guyana, in northeastern South America, a country known for its rainforests and wildlife. There, they provided training to Guyanese nurses and helped two of them become trainers themselves.

Guyana is one of South America’s poorest countries with deficient infrastructure and a shortage of skilled labor, but the EMS staffers said they were struck by the warmth of the residents there.

English is the official language of the former colony of British Guiana.

“It’s beyond humbling. We probably sweat things a little too much,” said New Britain EMS Lt. Victor Morrone. “These people never come across as unhappy, with a lot less.”

Morrone, an instructor in New Britain EMS’s paramedic program, traveled to Guyana with Farrell, New Britain EMS’s training center coordinator, under the auspices of the Guyana Immersion Experience, a program of the University of St. Joseph in West Hartford, and the Pan American Health Organization.

The program has been running since 2002 and is operated through the Sisters of Mercy, an order of Roman Catholic nuns, who also run the school in West Hartford. The sisters operate a nursery, a hospital and other facilities in Guyana.

A team from the school first went to Guyana to assess needs there and found critical-care nursing education lacking.

That’s where New Britain EMS and its academy came in.

Two nurses from Guyana came to Saint Joseph in September and were taught by Morrone to begin the start of their instructor certification. To finish off their certification, the two Guyanese potential instructors needed to run their own training course, under the monitoring of Morrone, to prove they were up to snuff.

Few problems or cultural barriers existed, other than the apparent need for technology, Morrone said. The nurses were all very knowledgeable on the basics of their field.

But while New Britain EMS has about eight electronic monitors, such equipment is scarce in Guyana. Instead of being scanned and signed digitally by phone, documents in Guyana often must be printed and physically signed.

“When it comes to individuals, that’s what drives you when you don’t have the most perfect heart monitor or your email doesn’t work like our email, as quick,” Morrone said. “What drives you is really how smart they are and how driven they are and their work ethic is beyond many people I’ve worked with here.”

Eleven nurses became trained in ACLS support by the end of the two-day course, and two people who hoped to become ACLS instructors did so, allowing them to train future nurses in ACLS care on their own.

“The whole idea with global projects is to make them sustainable,” said Knecht. “You don’t want to go into a low-income country and make yourself essential … you want to build up the infrastructure.”

As a side project while in Guyana, Morrone gave pediatric advanced life support training to five midwives. PALS training teaches advanced care of infants and children.

“I feel their confidence level is much better when they are offered more technology,” said Morrone. “I think they’ll embrace it much more.”

A retired firefighter, Morrone said he met with some firefighters in Guyana.

Morrone and New Britain EMS will be going back to Guyana to help maintain the instructors’ certification.