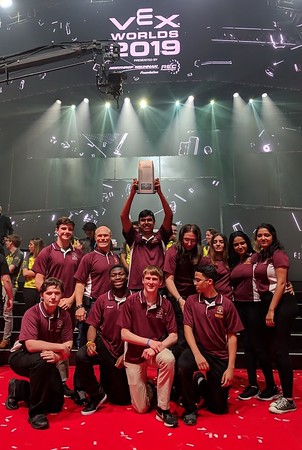 NEW BRITAIN - The success of CREC Academy of Science and Innovation‚Äôs Junior and Senior Robotics Team, which won its first World Robotics title, is a result of hard work, said the teacher and coach who guided the students.

‚ÄúMy classroom is laid out in engineering teams and the focus on teamwork and student leadership is central to my students‚Äô success,‚Äù said Dr. Robert Polselli, a Technology & Engineering teacher and High School Robotics coach at CREC Academy of Science and Innovation.

‚ÄúOur robotics team requires students to take charge of all of the work, from design, building, troubleshooting, prototyping, coding, driving, coaching, and collaborating with other teams to leadership responsibilities like checking the team in at competitions, ordering food, and ensuring that the robot is at the correct field on time. In six years our high school teams, 10 in total, have never missed a single competitive match.‚Äù

The season started in April 2018 and a new challenge was released on April 28, 2019. The season consists of eight to twelve hours of after school time each week since then. The school recently had seniors in Kentucky working with the sophomores and freshmen in Connecticut to help develop maximum score strategies as they will soon start to think of a new design for next year‚Äôs competitions.

Polselli said students are working hard in their analysis of their 2019-2020 challenge.

‚ÄúThis year, 24,000 robot teams competed worldwide from 220 countries and just earning a spot to compete at the World Robotics Competition meant that our team was in the top,‚Äù Polselli said. ‚ÄúYes, less than one percent before the competition began. To make it even more amazing, last year we were U.S. National Champions and ended 38th in the World only to return 2019 World Champions.‚Äù

The Academy of Science and Innovation‚Äôs robotics program includes 53 students and five teams.

‚ÄúOur five female engineers have inspired 17 girls to compete in robotics this year,‚Äù Polselli said. ‚ÄúFor the first time in school history, we competed with a seventh grade team, an eighth grade team, a freshman team, a sophomore team, and a combined junior and senior team.‚Äù

This year, the school‚Äôs sophomores were Connecticut State Finalists but they also made it to the quarter finals at the U.S. National Robotics Championship. The sophomore robotics team consists of eight students.

Among the school‚Äôs Innovation Ravens World Champions Team are 10 seniors, three juniors and one eighth grader.

‚ÄúThe juniors and seniors not only built a stronger six through 12 robotics program for our school, they lead by example and will forever be the first team in school history to become World Champions,‚Äù Polselli added.

According to Polselli, the teaching style that works best for this type of success focuses on each student with a high degree of emphasis on real world problem solving, practical skill development, character development and constructivist teaching where the student is responsible for their individual learning.

The Academy of Science and Innovation‚Äôs Connecticut and Regional championships are for Engineering Design and the World Championship title is for Innovation and Engineering.