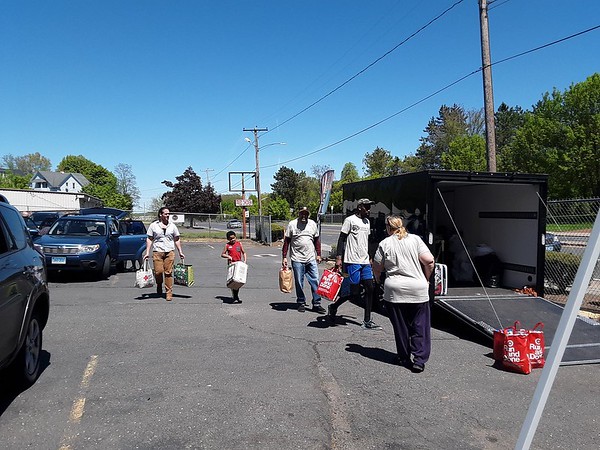 NEW BRITAIN - Some 40 people from 25 apartments were displaced by a fire at 180 Allen St. Friday afternoon. The North-Oak Neighborhood Revitalization Zone collected items throughout the entire weekend to help.

At House of Pizza, 952 Stanley St., on Saturday and Sunday, the group collected clothes, toiletries, toys and more for the displaced families.

“They basically have to fend for themselves,” said North-Oak NRZ President Pablo Rodriguez of the displaced families who lost items in the fire or were unable to access their apartments to recover them.

The two-alarm fire was called in around 3:15 p.m. Friday.

Residents escaped through the windows of apartments on all three floors of the building. No injuries were reported.

The fire is believed to have started in a rear stairwell, which was destroyed in the fire, but a cause was not immediately known, Fire Chief Raul Ortiz said at the scene.

The displaced families are staying at the Red Roof Inn in the city and a Marriott in Farmington, Rodriguez said, noting that the Red Roof had many rooms booked for guests associated with Saturday’s Race in the Park at Walnut Hill Park.

One family of seven is staying in one room, and beds aren’t available for other people in other rooms, Rodriguez added.

Adults, children, disabled people, people on medications - including one woman who had 18 prescriptions she lost access to because of the fire - and people who recently immigrated to this country make up the diverse group of people who were displaced.

The NRZ was working with a local pharmacy Saturday to help with that woman’s prescription issue.

The initiative to help the families started Friday night when the North-Oak NRZ helped deliver pizza, donated by House of Pizza, to the displaced families, Rodriguez said. Ortiz also helped into the early hours of Saturday morning to bring cots to those who didn’t have beds, Rodriguez said.

Saturday, the NRZ helped a girl celebrate her sixth birthday by giving her a cake, balloons and gift card to Chuck E. Cheese.

“It’s all about community,” said Alderman Francisco Santiago, who was on hand for the donation collection.

The NRZ Saturday was looking to reach out to other organizations for donations, Rodriguez said. A local church is looking to help distribute the donations.

The American Red Cross is helping with the displacement of the families.

“Any resident directly impacted by the fire and needs additional assistance is encouraged to contact our community services office on Monday so we can help identify needs and link them to community resources so that they can get back on their feet - 860-826-3370,” Mayor Erin Stewart posted on Facebook Saturday afternoon..