Charles Paullin | Staff John A. Barbieri, left, and Claudia Barbieri with their awards on Thursday, May 8 in New Britain Superior Court. Buy this photo 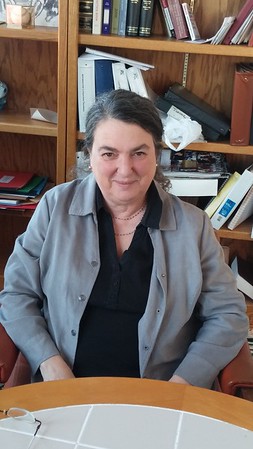 John Barbieri has been an attorney for over 50 years and has been an active volunteer with the New Britain CCARC, according to a release from his law firm. He has also chaired the annual CCARC Golf Tournament for more than 30 years, raising over $100,000 to help people with disabilities so that their dreams can happen, the release said.

“Such an award always means more to one when bestowed by members of your own profession, said John Barbieri. “I have enjoyed the professionalism of this Court and bar for a long time and am extremely honored to receive this today.”

Claudia Barbieri has been helping women and children victims of crime for 12 years while being appointed by judges as Guardian Ad Litem, or the attorney to represent them, the release said. She also has been an active volunteer on the Prudence Crandall Center’s Board of Directors in New Britain since 2007, and is in her third term as the board’s president. Prudence Crandall aims to help victims of domestic violence.

“While I often think ‘freedom of speech’ as my right to say what is on my mind I believe it is also the right to speak up,” said Claudia Barbieri, adding a thank you to her peers for the award. “A Guardian Ad Litem in a criminal case represents the best interest of a child who has been a victim of a crime. The “best interest” part really starts when the child – or someone else - speaks up to report that crime and it often has the effect of stopping the crime.”

Lewis has been with Connecticut Legal Services, which in part provides free legal help for low-income people, for over 40 years, Soulsby said. He most notably has worked on immigrant cases, including the reuniting a child and their parents after they were separated at the southern border of the U.S., Soulsby said.

“It was very nice and lovely to receive an award from my peers,” Lewis said. “I feel privileged to do this kind of work.”

National Law Day aims at celebrating the rule of law to provide an opportunity to understand how law and the legal process protect liberty, achieve justice and contribute to freedoms all Americans share, according to the American Bar Association’s website. This year’s theme was “Free Speech, Free Press, Free Society.”

“We are fortunate indeed to live in a country, and a state, with an independent judiciary, broadly respected by the people, and ready, willing and able to protect our First Amendment freedoms,” said Judge Daniel Klau, out of the New Haven Judicial District, who gave remarks on the impact of the first amendment in the U.S. since its founding. “Although we live in perilous times, when freedom of the speech and of the press are constantly under attack, I sleep better at night knowing that the courts will protect these cornerstones of our free society. I hope you do too.”