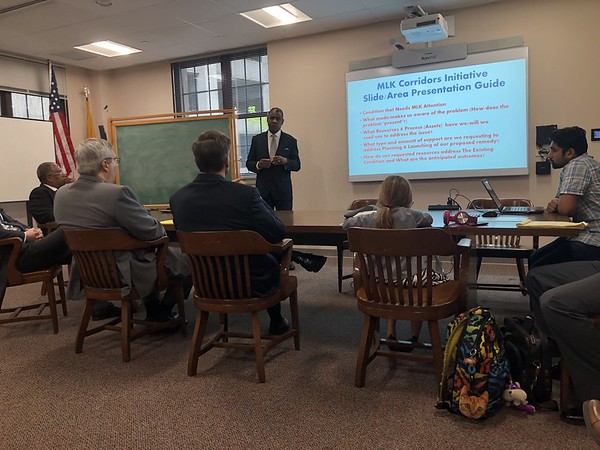 NEW BRITAIN - The MLK Corridors Initiative steering committee has been working with the community to come up with ways to redevelop the area surrounding Martin Luther King Drive, the primary focus of the initiative.

On Tuesday, the committee presented some of the ideas to several representatives from state organizations.

The presentations focused on economic development, improving education, increasing affordable housing and street recognition. The city was selected to take part in the initiative, which was sparked by adverse conditions in neighborhoods with streets named after King.

A teacher for nearly 38 years, the Rev. Gervais Barger addressed education, in particular the low-performing schools in the area.

“Smalley [Elementary] School, that is centered in the Dr. King corridor, is one of the lowest-performing schools in the district,” said Barger, adding the school has a high absentee rate and some of the lowest state test scores. “We want to close the educational gaps,” he said.

“At this point, we can no longer ignore the disproportional number of students that cannot compete based on 21st century skills that are necessary for success in this culture,” said Barger.

Barger suggested a King center hub, where parents can share in community resources.

“The more we can get the parents involved in the educational progress, there’s no doubt in my mind that the children and their success in school will increase as well.”

The Rev. Andre L. McGuire, who focused on economic development and employment, discussed the addition of a small business incubator. He said he’s heard from many residents who want to start small businesses but don’t have the resources to do so. Refurbishing buildings to host the start-ups would be the first step, he said.

“The greatest asset in New Britain is the people,” said McGuire, adding that the program should focus on helping residents get jobs. He said the city has enough organizations teaching interviewing skills and resume writing, but not enough helping link people to jobs.

“We want to make sure that we develop a team of individuals to collaboratively work with all of these organizations to make sure that folks have a job when they get finished with the various training,” said McGuire. “It amazes me how much money we spend to make sure they are prepared, but then we don’t do the final work.”

Community leaders and several members of the Faith, Restoration, Empowerment and Economic Development Outreach Ministries carried out the presentations. The meeting was facilitated by the Rev. Carl McCluster, a steering committee member.

Among those listening to the presentation were: David Kooris, deputy commissioner of the state Department of Economic and Community Development; Jorge Perez, commissioner of the state Department of Banking; Jim Bzdyra, president and CEO of the Community and Economic Development fund; and Jeff Gentes, lead attorney for the Connecticut Fair Housing Center. State Rep. Bobby Sanchez of New Britain was also in attendance.

Michelle France can be reached at 860-801-5087 or at mfrance@centralctcommunications.com.