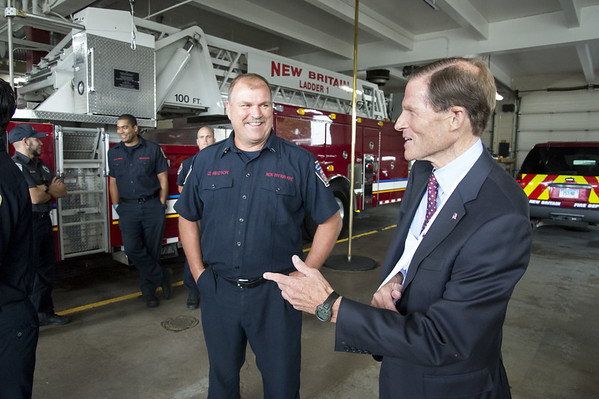 NEW BRITAIN - U.S. Sen. Richard Blumenthal met with city officials at fire department headquarters on Beaver Street Friday to announce that a grant of $232,000 from the Federal Emergency Management Agency will be going toward upgrades of the city’s EMS and fire department.

New Britain was one of several communities in the state and 294 across the country to receive funds from the $45 million in FEMA’s Assistance to Firefighters Grant program.

New stretchers and ambulance mounting systems for stretchers will be purchased with $202,000 that was awarded to New Britain EMS, Chief Bruce Baxter said. The stretchers being retired were raised about 2.7 million times, and the mounting systems in most ambulances are no longer considered able to withstand a crash, he added.

The remaining $30,000 of the funds will go toward new fire alarm systems at four of the six firehouses that don’t have them, said Fire Chief Raul Ortiz. The other two do.

“We want to make sure they’re protected,” Ortiz said of firefighters who are at the houses 24/7. “It’s more money that we’re able to save the city.”

The fire alarm systems installation coincides with the department’s efforts to upgrade all firehouses throughout the department, a plan that is expected to cost about $15 million to $18 million over the next five to 10 years, Ortiz added. Earlier this week, it was announced Station No. 4 will be closed for two to three weeks for repairs.

“Thank you so much for always advocating on our behalf,” Mayor Erin Stewart said to Blumenthal, while acknowledging the work of the rest of the state’s federal delegation. “We don’t have to tell you how we struggle with tight budgets to find alternative ways to find these very important, critical functions of our city.”

The fire department, with the help of Fire Marshal Don King, has applied for three other grants from the same fund. One of those grants would go toward providing salaries and benefits for additional firefighters for the next three years to address shortages and reduce overtime. The other two grants would help provide training to firefighters, and allow the department to distribute stovetop fire suppressants that are placed under stove hoods to help combat kitchen fires.

“The guys who are standing here today, men and women of our fire services in Connecticut, are not only professionals, they perform with incredible distinction and dedication,” said Blumenthal. “Their diligence often saves lives…New Britain is ones of the best in the state.”