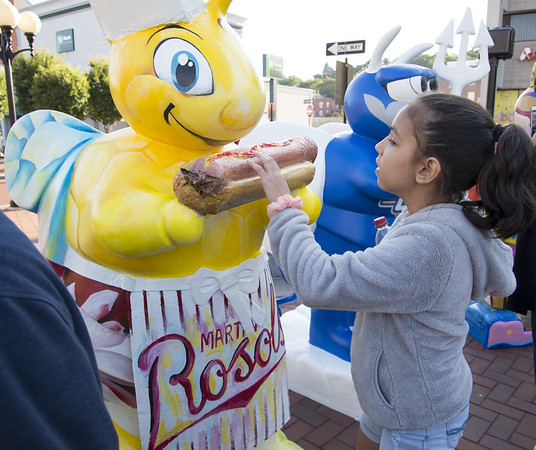 09/18/19 Wesley Bunnell | Staff Four more six foot decorated fiberglass bees were unveiled at the Cele-BEE-tion on Wednesday night at Central Park. The bees are partnership with the NBAA and sponsors from throughout the city. Yaneli Morales, age 10, looks over the hot dog being held by Marty Bee by Rosol's Meats. Buy this photo

09/18/19 Wesley Bunnell | Staff Four more six foot decorated fiberglass bees were unveiled at the Cele-BEE-tion on Wednesday night at Central Park. The bees are partnership with the NBAA and sponsors from throughout the city. Standing with the Blue Devil Bee is President Zulma Toro, 2nd L , as she stands with fellow CCSU employees. Buy this photo

NEW BRITAIN - Six new bee statues joined the rest of the hive at an unveiling celebration in Central Park on Wednesday, where a crowd of bee enthusiasts, city officials, and artists gathered to witness the exciting finale reveal.

As part of the Bees Across New Britain public art project, Mayor Erin Stewart and the Greater New Britain Arts Alliance have partnered with sponsors from the city to create 25 six-foot-tall fiberglass bees that have been designed and painted by local artists. Two rounds of the bees have been displayed in Central Park over the summer and the six new and final bees now stealing the spotlight are Board Street “Polish Bee” by Joanna Cistulli, Rosol’s Meats’ “Marty Bee” by James Gaffney, American School for the Deaf “ASL Bee” by Candice Macy, the Community Mental Health Affiliates’ BEEhavioral Health Bee by Jennifer Oliveira-Florio, the “Borinquen Baker Bee” by David Segarra, and the CCSU “Blue Devil Bee” by Pedro Valentin. Craig Frederick was the sculptor for the maquette.

“It’s amazing how transformative public art can do to a city,” said Stewart. “Families, children, students, teachers, and visitors have come specifically to see the bees and support our local businesses. Art does incredible things and you don’t understand the full magnitude of it until you see it come to life.”

Although it was an unveiling of the final bees, Stewart said she has a feeling that this is just the beginning

“It’s an interactive art project to allow people to tour the city,” she said. “So that doesn’t end today. It’ll be art that the public can enjoy for a long time to come.”

Several bees have already buzzed their way to sponsor locations, including “Welcome Bee” at the Jerome Home and Arbor Rose, “Bee Healthy” at the Hospital of Central Connecticut, “Travel Bee” at Perkins Travel on South High Street, and “Patriotic Bee” at One Liberty Square.

CCSU’s Blue Devil Bee will be taking flight over to the school’s campus today. University President Zulma Toro said the statue represents the successful collaboration and partnership between the school and the city.

“The bee, the colors, and the design, they all symbolize the two entities,” she said. “We hope to integrate our institution with the city and help New Britain become a college town. I think with two strong females putting our hats and hearts together, we’ll make things happen.”

“They’re an incredible addition to the city,” she said. “Thousands of hours were spent into creating the bees and I’m excited that the people will be able to visit them. The project shows that art in the heart of the city is strong and I’m so proud to be a part of this.”

The crowd was eager to take pictures with the bees, talk to the artists, and dance to the music performed by the New Britain High School Tropical Storm Band, who kicked off the afternoon’s celebrations.

Anne Mannion, a visitor from West Hartford, said it is very uplifting to see such vibrant and creative art on display.

“It encourages people to come out to see them” she said. “I think this is a very clever and imaginative way to beautify a city.”

Maps with the final location of all the bee statues can be found at www.happeninghere.org/bees .