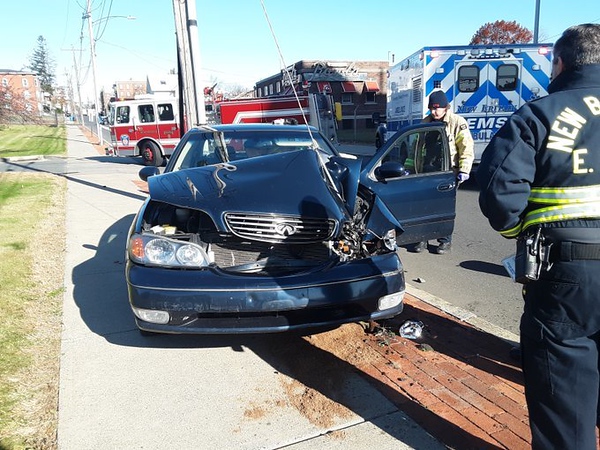 Charles Paullin | Staff The car that drove into a wire supporting a utility pole at the intersection of Lafayette and Grove streets Wednesday morning. Buy this photo
Published on Wednesday, 13 November 2019 19:55
Written by Charles Paullin

NEW BRITAIN - An elderly man who was bleeding from his head after an accident at the intersection of Lafayette and Grove streets was taken to a hospital Wednesday morning.

The accident happened around 10 a.m. The man, driving an Infiniti sedan, was reportedly conscious immediately afterward.

Police at the scene said the man told them he was turning left onto Grove Street from Lafayette Street when he saw another car in the area and turned to get out of its way. The man ended up driving his car onto a curb on Grove Street, where a wire supporting a utility pole sliced through the front bumper into the engine compartment and stopped the car.

The Infiniti was towed away. The car that the man was avoiding did not remain at the scene.

The utility pole was undamaged. An Eversource worker said its equipment was fine, but a telephone company will have to repair the wire, which wasn’t as permanently attached as as before the accident.