Parked cars at root of complaints in Arch Street area 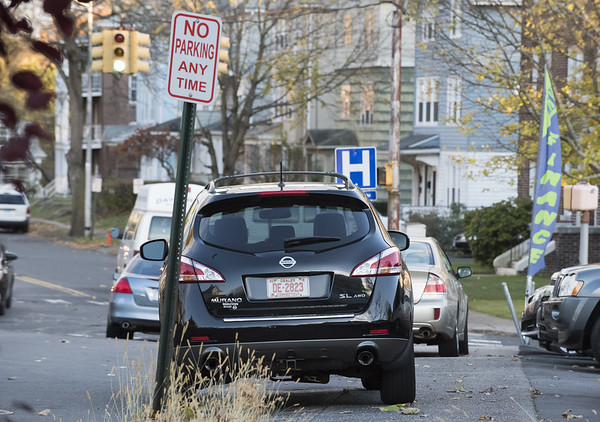 Wesley Bunnell | Staff One of two cars with dealer plates parked outside Central Auto Sales and Service in front of a no parking sign. Buy this photo
Published on Wednesday, 13 November 2019 20:26
Written by Charles Paullin

NEW BRITAIN - After working a third-shift job and getting home between 5:30 and 7 a.m. each day, Thelma Solomon said, she wants to come home to peace and quiet.

But when she returns to her Parkmore Street home, she said, she is greeted by loud music coming from cars parked at the Borinquen Bakery on nearby Arch Street.

“When you work nights and you come home to get some sleep and you can’t, it’s horrible,” Solomon said. It’s at its worst on Saturday and Sundays, she said.

The issue at the bakery, which relocated to 610 Arch St. in February 2017, doesn’t stop there for Solomon. Cars are illegally parked at the northeast corner of Arch and Monroe streets, she said, which makes it difficult for school buses and large trucks to get by on the narrow road.

Cars are also parked on the opposite side of the street from the bakery, where parking is prohibited.

Signs are clearly posted designating where street parking is allowed in the area, but the bakery should put up its own signs telling people to lower the music and park legally to respect the neighborhood residents, she said.

“I understand money is important … but you also have to think of residents,” Solomon said.

There’s also an issue with parking at Central Auto Sales and Service, diagonally across from the bakery. That business allegedly takes cars off its lot, which is about as full as possible, and park them on Parkmore Street overnight to make room on the lot, Solomon told The Herald.

That takes up places to park on the street for the people who live on Parkmore and Arch streets, she said, noting the houses do have driveways.

“These people (the current owners of the auto business) keep it a little bit under control,” Solomon said, in comparison to the previous owner of the dealership. When there is a problem with the parking on Parkmore Street, she said she talks to the owners and they’ll move the cars.

Charlie Walk, 84, who lives next to the business, said cars will park at the front of the auto business’ lot, where no parking signs are posted, blocking his view when pulling out of his driveway.

“If (Central Auto Sales and Service) gets them out of here, then they can park some of them damn cars in there,” Walk said, referring to cars he said have been on the lot for several years.

Solomon, who has lived at her address for about 20 years, said she has approached the people playing loud music out of their cars parked at the bakery, but those people say they don’t understand her because they don’t speak English. She said she’s also spoken to workers at the bakery by phone, only to be hung up on.

She said she also called Mayor Erin Stewart’s office several times and has not received a response from the mayor or her staff.

“So, frustrating? Yeah,” she said. “(Erin Stewart) wants to be the mayor again ...” Solomon said. “.. (but) you’re not doing the job anymore. You’re starting to care how this city is starting to look instead of the residents, and I don’t like that … when it really starts getting like that ... I can really pack up and go.”

Aware of the issue

The bakery staff is not blind or deaf to the issue, said Katherine Robles. She helps manage the business.

“We are a very neighborhood friendly business. ... We want people to feel welcome, safe and comfortable,” she said.

Employees will advise customers to keep the volume on their music to a minimum, and also tell them to park on the right side of the road, she said.

But the issue of the traffic at the intersection is out of the bakery’s hands, Robles said.

“It’s a busy road,” she said. “We can’t really control what people do on public property. Realistically, we only have so much control of what our customers do outside our business.”

The business has been working with police officers to patrol the area and put traffic cones up at the corner to remind people not to park there, but the cones end up getting stolen, Robles said.

“When we have the police patrolling, it’s great,” Robles said. “We don’t have to worry at all because they’re doing their job, we’re doing our jobs, people are in and out and everyone’s happy.”

Expanding the parking lot, which is north of the business and can now fit about 10 cars, is among plans the business is making to help with the problem, Robles said. Bringing the sidewalk along the street parking area in closer to the business to widen the road is another idea. The lot behind the building is where employees park and is also used for deliveries.

“We’re really happy to be a part of this neighborhood,” Robles said. The business has made several investments to upgrade the building, clean up graffiti on it and hang a lighted sign outside.

“I’m really sad we have somebody that’s upset with us being here,” Robles said. “I think it’s misunderstood that it’s not really our intentions to disrupt anyone’s life or happiness.”

Robles posted in the New Britain Talk Facebook group on Sunday a message similar to what she shared with The Herald, and a picture of the signs displayed at the business saying to keep outside noise to a minimum and park legally.

One responding resident suggested painting the section of the curb where no parking is allowed and another wrote that people need to be patient and understanding on the issue.

A Central Auto Sales and Service worker declined to comment to The Herald on the matter.

City police did not immediately return calls to The Herald about the parking and noise issues.

City Planner Steve Schiller also did not immediately return a request for comment on the limited space for parking in the area.

In a statement emailed to The Herald, David Huck, public affairs specialist in the mayor’s office, said, “We have repeatedly been responsive to the complaints from this resident and have directed them to both the Police Department and the Building Department.”

“We have encouraged the resident to contact the Police Department when she suspects there is a violation,” Huck also wrote. “Police have been out to her neighborhood on numerous occasions and will continue to monitor the area.”

Another Facebook user posted in the New Britain Talk group on Sunday a picture showing he had parked legally in front of the bakery but had received a parking ticket.

The man who received the ticket later posted a Facebook message he had received from the Police Department saying that police have received several complaints about parking in the area and that the Facebook user could disregard the ticket, explaining that the officer didn’t see the sign allowing the parking and thought the truck was too close to the intersection.