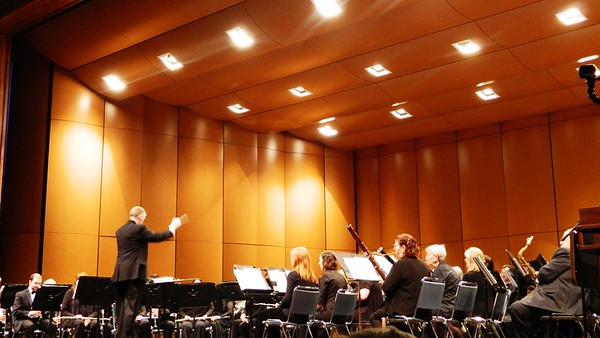 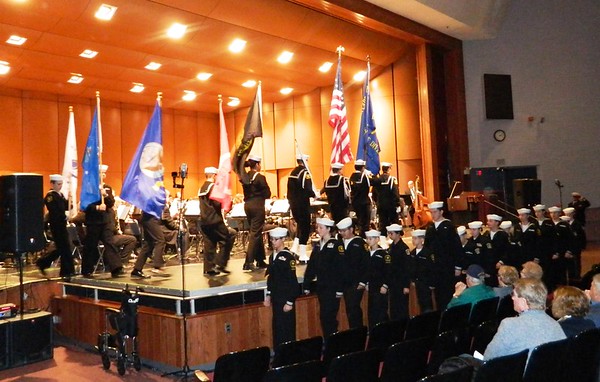 Erica Drzewiecki | Staff The Barque Eagle Sea Cadets present the colors as the Plainville Wind Ensemble performs the national anthem during the Veterans Concert at CCSU in New Britain Sunday. Buy this photo

Veterans of all ages showed up for “Summon the Heroes.” Admission was free with an unwrapped toy donation for the Marines’ Toys for Tots Foundation, based in Plainville.

“This is my first time coming for this concert,” Army veteran Ken Benson said as he was walking into CCSU’s Welte Hall.

The Southington resident was honored to know the program was created especially for people like him, a Vietnam War veteran who was drafted and fought overseas from 1966 to 1968.

Plainville’s Barque Eagle Sea Cadets, including about 30 local teens, helped attendees to their seats. Handing each a program as they entered the auditorium, the youth asked women and some of the elderly guests, “May I escort you in?”

“It makes me feel honored to support those who fought for our country,” 16-year-old Jonathan Gonzalez said.

He is the third child in his family to go through the Cadets, a community service-oriented organization that teaches youth leadership and is often the precursor to military service.

“We’ve been doing this for six or seven years now,” he added of the concert. “It’s a good experience for them to perform on stage.”

“You look great and it shows a great deal about our future to see you here,” Morris told them.

His goal for the concert was to honor all veterans for their service, but also to recognize the difficulties faced by Vietnam-era veterans in particular.

“Hopefully through this, it makes the public more aware that freedom isn’t free,” he explained. “These guys didn’t get the welcome home the first time, tragically. And some of them paid the ultimate price.”

“We have prepared an afternoon of music we hope will do justice to those who served our country,” Marsan said.

In between patriotic works that included “The Star-Spangled Banner” and John Williams’ “Summon the Heroes,” Hartford HealthCare staff presented Vietnam vets commemorative lapel pins authorized by the Department of Defense.

This was followed by the world premiere of “Righteous Among the Nations” by Jane Russel Bate, from Cheshire. She dedicated the piece to Nicholas Winton, who rescued 669 Czechoslovakian children from the Holocaust. He kept his heroic deed secret for 50 years, until a scrapbook discovered by his wife was finally made public.