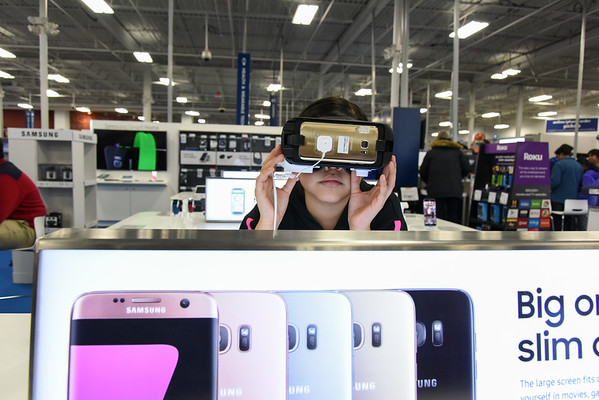 NEW BRITAIN - The dynamics of holiday shopping have changed and consumers are no longer waiting for the Black Friday window to begin marking items off of their shopping list, causing retailers to shift their sales and specials weeks ahead of the Black Friday events.

More than half of consumers have already started their holiday shopping and nearly a quarter of purchases have already been made, according to an annual survey released on Nov. 21 by the National Retail Federation and Prosper Insights & Analytics.

“This is further evidence that the holiday season has grown far beyond the period between Thanksgiving and Christmas,” said National Retail Federation President and CEO Matthew Shay. “Thanksgiving is still a hallmark of the season and there’s billions of dollars in shopping still to come. But many consumers have already been shopping for weeks, and retailers are increasingly adapting to that.”

Both Walmart and Target on the Berlin Turnpike were full of shoppers purchasing electronics and toys on special early last Thursday morning.

According to a Target Spokesperson, this year, Target has introduced HoliDeals featuring thousands of deals throughout the holiday season on items like décor, electronics, toys and more that started as soon as Nov. 8 with the Black Friday Preview Sale.

The preview features about quadruple the number of deals compared to last year and two full days of savings.

Their season-long savings started Nov. 16 through Dec. 15 with the return of Target’s popular weekend deals.

“Consumers don’t wait for Thanksgiving or Black Friday anymore and neither do retailers,” said Phil Rist, Prosper executive president of strategy. “Retailers responded this year by offering promotions earlier than ever, with some rolling out holiday deals even before Halloween.”

With Thanksgiving at the end of November this year, 2019 only has 26 days between Thanksgiving and Christmas, which is down six days from last year and the shortest number possible. The National Retail Federation does not expect that to make a difference in spending given the number of people who began shopping earlier. They still expect about 165.3 million people will shop in stores and online from Thanksgiving through Cyber Monday due to tradition, the social aspects of spending time with friends and family and of course good deals.

“This is the busiest time of the year for our guests and with the shortened season we want to make it as easy as possible for them to cross everything off their holiday list at Target,” said Rick Gomez, executive vice president, chief marketing and digital officer for Target.

Black Friday culture has changed for a multitude of reasons including budgets, crowds and last-minute stress leaving retailers to begin holiday sales and enticing promotions much sooner than the traditional Black Friday window.