12/03/19 Wesley Bunnell | Staff Marcel Saavedra is chased by the family bulldog Roxy down a snowy hill at Smith Elementary School on Tuesday December 3, 2019. Buy this photo

The snow is moving out of the area this morning. Buy this photo

Wesley Bunnell | Staff Jayvian Graci-Rivera slides down a hill at Smith Elementary School on Dec. 3 during the last snowfall. Buy this photo 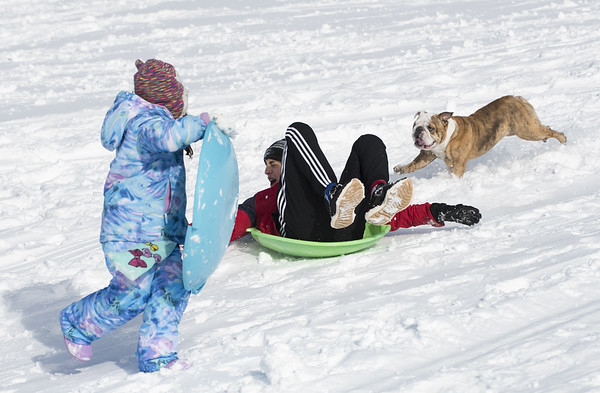 12/03/19 Wesley Bunnell | Staff Marcel Saavedra is chased by the family bulldog Roxy down a snowy hill at Smith Elementary School on Tuesday December 3, 2019. Buy this photo

12/03/19 Wesley Bunnell | Staff Marcel Saavedra, left, sleds down a hill at Smith Elementary School on Tuesday December 3, 2019 as they are greeted by Roxy the Bulldog and a Samoyed named Storm. Buy this photo

A slow moving snowstorm that hit the area over almost two days dropped a significant amount of the white stuff across central Connecticut.

A total of about 10 inches hit Southington across the 37 hours of the storm, according to the National Weather Service at 9:49 a.m. Tuesday. Farmington received about 13 inches of snow by that point. Snow totals were lower along the Connecticut coastline.

WFSB weather reported Tuesday morning that temperatures were expected to climb to about 36 degrees around 2 p.m. Tuesday. Skies started as partly cloudy and transitioned to sunshine for between about 1 and 4 p.m.

Major roads in New Britain and Newington were mostly clear to the blacktop with some slush as of about 9 a.m. Tuesday. Smaller side streets had a smaller amount of snow and slush on them.

As of Tuesday morning, the city reported 19 crashes, 422 parking ban tickets, and 28 tows since the storm started around 1 p.m. Sunday. The parking ban was in effect until 3 p.m. Tuesday.

A car crash near the intersection of New Britain Road and John Karbonic Way Tuesday afternoon involved three cars and resulted in one man being transported in a stretcher to a hospital for minor injuries. One of the cars ended up off the road on top of snow on John Karbonic Way with some front bumper damage on the passenger side.

In Newington, Police Chief Stephen Clark said one tree fell down on Ledgecrest Drive and Back Lane, without taking any wires down, during Monday night’s snowfall. Two car accidents were reported with vehicle damage and no injuries, Clark added.

A Berlin police dispatcher reported no major accidents or trees down Tuesday morning.

Plainville police said there were four motor vehicle accidents during the storm in their town, in addition to a car that went off the road and into a ditch.

“Besides the usual un-shoveled sidewalks and parking violations, there hasn’t been too many storm-related incidents,” Plainville police Lt. Nicholas Mullins said.

Southington police on Monday said six accidents had been reported as of the afternoon hours. None involved serious injuries. A spokesperson could not be reached Tuesday for an updated count.

Wednesday and Friday are forecasted to feature a possible flurry and chance for snow showers in the afternoon, respectively, according to WFSB.