'It's supposed to be about the kids': How area coaches, athletes are trying to put a lid on toxic commentary from parents, fans at sporting events 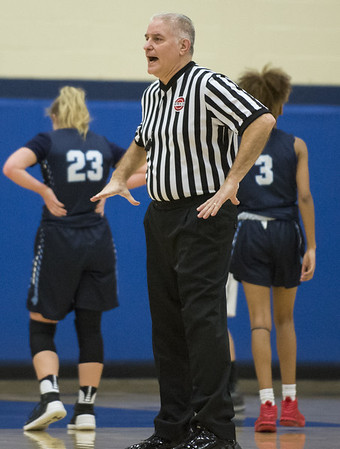 01/16/20 Wesley Bunnell | Staff Newington girls basketball vs East Catholic in a game on Thursday Jan 16, 2019. Newington's Ashanti Frazier would break the 1,000 points scored milestone during the first half. Buy this photo

Simmone‚Äôs Hurricanes were at Wilbur Cross this past May, battling a Governors team that had won just one game that season, and only four the year before. Wilbur Cross was hardly a school expecting success in terms of wins and losses on the softball diamond.

So when a Wilbur Cross batter lifted a one-out pop-up to right field and the runner on first base took off for second, and the coaches didn‚Äôt catch the miscue, Simmone didn‚Äôt think much of it. The program wasn‚Äôt on the greatest footing, and was prone to mental mistakes such as the one unfolding in front of him. But the reaction he heard from behind the Governors‚Äô bench after New Britain completed the easy double play is something Simmone won‚Äôt forget, even if he wanted to.

‚ÄúYou f------ suck!‚Äù the fan shouted toward the Wilbur Cross coach. ‚ÄúYou‚Äôre the worst coach ever. You don‚Äôt know what the f--- you‚Äôre doing!‚Äù

Simmone, an admittedly fiery coach in his earlier years, couldn‚Äôt believe what he heard. He watched as even after Wilbur Cross shocked New Britain with a 2-1 win, the fan continued to rain insults on the coach that had just picked up an improbable victory.

‚ÄúThis father was calling the coach a ‚Äòf----- ass----,‚Äô‚Äù Simmone said. ‚ÄúIt was ridiculous, and it was over and over. Someone had to make a phone call and the athletic director came ‚Ä¶ and he still wouldn't leave. I was so embarrassed for the coach. This guy berated him. It was awful.‚Äù

What is particularly disturbing to Simmone, and many other high school coaches in the area, is the impact such behavior has on the student-athletes that are on the field, awkwardly trying to make their way through the game while doing their best to drown out heckling from the stands, which often comes from the mouths of parents. Simmone‚Äôs experience at Wilbur Cross was a severe case, but such behavior has not been uncommon.

Many parents show a relentless dedication to the support of their children when it comes to youth and high school sports, following them around the state to cheer them on through rainy Aprils on the diamond or bitter-cold Decembers on the gridiron. But with that show of support often comes a dose of embarrassment for the kids they are cheering on, especially when those parents decide to make their opinion known toward coaches, officials or other players. In smaller crowds like those at high school sporting events, it‚Äôs not difficult to decipher where the jeers and tantrums are coming from. Kids can make out who it‚Äôs coming from, and it‚Äôs difficult to ignore.

‚ÄúYou can definitely hear that stuff,‚Äù said former Berlin boys basketball and baseball starter Ryan Hyde, who admits he heard his fair share of vile commentary from the stands during his high school career. ‚ÄúI would think, 'oh my God, how can someone yell something like that at another human being?'‚Äù

Hyde, who spent four years as a catcher for the Redcoats, had plenty of conversations behind home plate with umpires, as well as on the court with referees during basketball season, and can‚Äôt help but feel sympathetic for those who take the main brunt of heckling from parents and fans in the crowd. The Wilbur Cross parent aimed his anger at his own team‚Äôs coach, but more often than not, the rage is saved for the officials and umpires, and when it happens, the scene isn‚Äôt pretty.

‚ÄúNo one ever wants it to be their parents,‚Äù Hyde said. ‚ÄúIn the heat of the moment, when it's a big call or a big point in the game, it's distracting when you have to think about that while trying to get your team a win. I always tried to tune it out, whether it was my parent or someone else's parent. The refs are doing their best. It's not always the right call, but in the end it's a high school game. It's supposed to be about the kids.‚Äù

The CIAC has admittedly experienced a shortage in officials, and is working to retain and recruit officials to fill those open positions. Dan Scavone, director of the Officials Association at the CIAC, names other reasons for the decline in officials in Connecticut, like changing job hours, but also points to the fans‚Äô treatment of officials as a part of why officials have become harder to find.

‚ÄúOfficials have a tough job,‚Äù Scavone said. ‚ÄúIt's one of the only jobs I know of that they are expected to be perfect and only get better from there. It's a tough job, and we have to be courteous toward those officials.‚Äù

Scavone and the CIAC have already taken a number of measures to improve the relationship between officials and fans. The CIAC‚Äôs Class Act Schools initiative is designed for schools to volunteer as members to regulate strict spectator policies, and meet on a regular basis to determine if there was inappropriate behavior at a recent sporting event. Many area schools have signed on as part of the program, including Innovation, Berlin, Goodwin Tech, Newington, Plainville, Southington, Bristol Central and St. Paul.

Other means to improve the atmosphere at high school sporting events include the new Officials Appreciation Initiative, which began Jan. 9. Schools are encouraged to show their gratitude for local officials in their own way throughout the rest of the month. The CIAC is also working on another video aimed toward parents and fans like the one they made prior to the fall state tournaments, where athletes and coaches came together to ask for fans to refrain from yelling at players, coaches and officials, using the hashtag ‚ÄúLet us enjoy it.‚Äù Among those included in the video were Bristol Eastern girls volleyball players Zoe Lowe and Ryley Plourde, as well as Southington girls soccer head coach Mike Linehan, who holds a parents meeting before the season to lay out his expectations for their behavior in the stands. Unfortunately, there are still some who don‚Äôt follow those guidelines.

‚ÄúJust think of it from your daughter's perspective,‚Äù Linehan said. ‚ÄúShe's playing and she's got mom or dad yelling from the sidelines at an official. It's a contradiction to what we tell the kids in that you have to respect the decision of the officials. They're part of the game, and they're making a decision based on how they see it. They're not intentionally making a wrong call. I think referees are doing the best job they can.‚Äù

Linehan is one of many area coaches that try to lay down strict protocols for parents before a season begins, and what behavior is or isn‚Äôt acceptable. If parents get out of line, then coaches try to make it clear the behavior won‚Äôt be tolerated. Last spring, Berlin boys lacrosse coach Scott Rossi was forced to pull a parent aside before a game and warn them if he continued to hear negative commentary from him, he wouldn‚Äôt be allowed back at games.

The necessity for such conversations is unfortunate, but coaches would rather have that discussion if it means less distraction and embarrassment for the players and officials on the field.

‚ÄúWhen I pulled him aside, I was thinking more about his son than I was about his feelings,‚Äù Rossi explained. ‚ÄúThat's what I clarified to him. I told him his son can hear what he's saying, whether it's about him or someone else. I said, 'how do you think that's making him feel? He's having a hard time focusing because all he's thinking about is how mad you're going to be on the car ride home.' I think sometimes when you put that in perspective for the parents that they're watching children play a game, you hope that sets in.‚Äù

THE SIDE EFFECTS OF BEING A FANATIC

Unfortunately, the mindset of a parent watching their children play can even enhance such behavior. Doctor Jim Taylor, an Avon native that specializes in the psychology of sport and parenting who authored the book ‚ÄòRaising Young Athletes,‚Äô notes the ‚Äòreverse dependency trap,‚Äô where parents become susceptible to using their child‚Äôs experiences to define their own self-worth, and how that type of emotional investment can lead to uncharacteristic behavior.

‚ÄúOverall, the bottom line issue is that parents are way too invested in their kids' participation in youth sports,‚Äù Taylor said. ‚ÄúThey've been seduced by this toxic culture that it's all about winning and that their kid is going to be the next superstar. My basic recommendation to parents is to just get a life. If your self-esteem is dependent on how your kids do, you're setting yourself up for failure.‚Äù

The student-athletes on the field tend to agree, at least in the eyes of Simmone, who has seen his own players try and take a stand with their own parents, hoping it will spark a change in behavior.

‚ÄúI've had a couple girls leave the dugout and tell their parents to just shut the heck up,‚Äù Simmone said. ‚ÄúBut they're embarrassed. They look at me and say, 'I'm so sorry coach.' If I have time, I'll walk over and tell Mr. or Mrs. so-and-so to chill out and just watch the game.‚Äù

In Rossi‚Äôs case at Berlin, he saw how parents‚Äô commentary affected his players, but also saw his players rally around each other to try and help a teammate through the unfortunate irony of being brought down by a parent that is so obsessed with seeing their child succeed.

‚ÄúI would hear teammates on the sideline trying to encourage him and lift him up and tell him not to worry about it,‚Äù Rossi said. ‚ÄúWhen I would speak to him, he was often times very dismissive. He would shrug his shoulders and say, 'I'm used to it.' It's kind of disheartening to hear that. You see them working hard in practice every day and doing their best. When parents show up on game day, they have to realize the other kids are doing their best as well, and sometimes their best is better than your kid‚Äôs best. Parents just have a hard time at that.‚Äù

KIDS TRY TO KEEP THE PEACE

The affects stretch beyond the current game. Hyde, an all-around sports nut, is adamant he will never become an official because of the insults he‚Äôs heard thrown at umpires and referees during his high school days. Taylor notes a 70 percent drop-off in youth sports participation between the ages of 8 and 13 due to stress or loss of enjoyment. Those that do stick around often see their parents stay as well, a fixture in the stands and a familiar presence, though that presence is not always a comfortable one.

It can even be a violent one in severe cases, like the fight that broke out between parents in Hartford back in November at a Pop Warner football game, where children had to try and separate the parents before severe injuries were suffered. A similar event unfolded in Simsbury back in 2014, when a boys basketball state tournament game was halted in the fourth quarter when parents began fighting in the stands. Once again, the players had to get involved to try and help restore order.

Coaches, players and members of the CIAC are working to eradicate the behavior that brings embarrassment to the athletes on the field, but this often-discussed issue is clearly still a problem, even in this area.