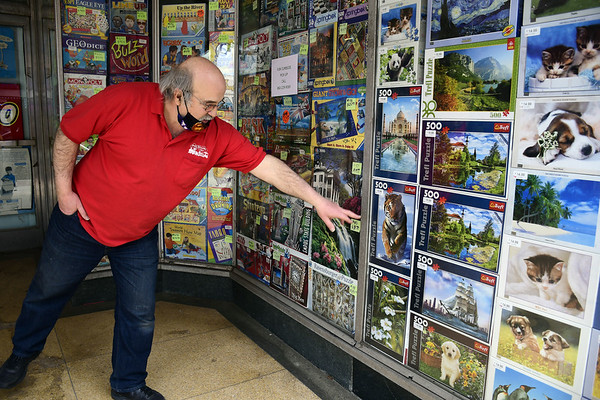 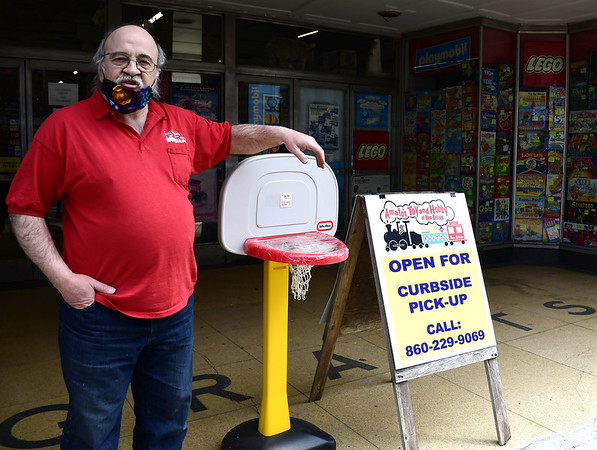 NEW BRITAIN ‚Äď Amato‚Äôs Toy & Hobby has creatively figured out a way to use its big storefront windows to its advantage.

The New Britain toy store is using those windows to display its large array of puzzles for customers to purchase, as everyone is stuck home during the pandemic with not much to do.

‚ÄúThe puzzles are in high demand because people have a lot of time to kill and it‚Äôs pretty low cost,‚ÄĚ owner Steve Amato said. ‚ÄúThe week before the shutdown, when people knew it was coming, they were coming in for puzzles, paint by numbers, model kits and other kinds of things that consume time and don‚Äôt cost a ton of money.‚ÄĚ

Once the shutdown began Amato had to think outside the box and come up with a way to show and sell customers the puzzles.

‚ÄúWe came up with the idea since we have this big window let‚Äôs turn it into a display or a vending machine, that‚Äôs what we‚Äôre calling it,‚ÄĚ Amato said. ‚ÄúSo we have all the puzzles up against the glass. We put a little tag on each one with a little piece of paper with a price and a number.‚ÄĚ

‚ÄúSo people can come over, take a look (outside the store), and say I want number five and number eight. Call us up, tell us what they want, give us their credit card information, we charge them, put the puzzles in a bag and bring it out to their car so this way there‚Äôs no human contact and they get what they need,‚ÄĚ Amato said.

Amato said the vending machine idea has been well-received by customers and he has sold a couple hundred puzzles since the shutdown started.

‚ÄúSeveral people were like ‚Äėoh my god, this is so great,‚Äô‚ÄĚ he exclaimed. ‚ÄúTwo days ago I got a call from a guy and he said, ‚Äėhey, do you still have that big Disney puzzle?‚Äô I said, yup. He said, ‚Äėwell I want to buy it.‚Äô I said, when do you want to buy it? He said, ‚ÄėI‚Äôll be there in five minutes‚Äô and came and bought it.‚ÄĚ

It was one of the world‚Äôs biggest jigsaw puzzles, with 40,320 pieces, and is 27 feet long 5.5 feet tall. The Disney themed puzzle was on display in the window prior to the vending machine being put in. Amato‚Äôs also has puzzles that are glow in the dark and some that are 3-dimensional ones you can build, like an actual 3D castle or the Empire State Building.

Along with the curbside service people are able to purchase items online, but many of the puzzle companies are backed up or closed. The vending machine is a way to get your puzzle promptly with no wait.

‚ÄúApparently what I heard is on the internet they‚Äôre saying two to three weeks for delivery,‚ÄĚ Amato said. ‚ÄúCompanies are having a hard time keeping up with orders.‚ÄĚ

In another one of their big storefront windows they are also doing a Lego display with the same concept as the puzzles.