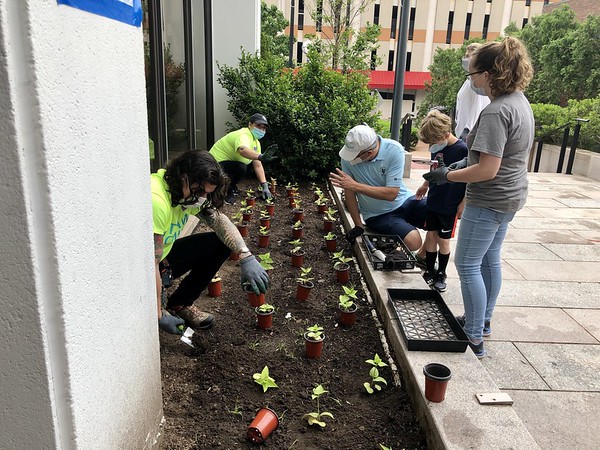 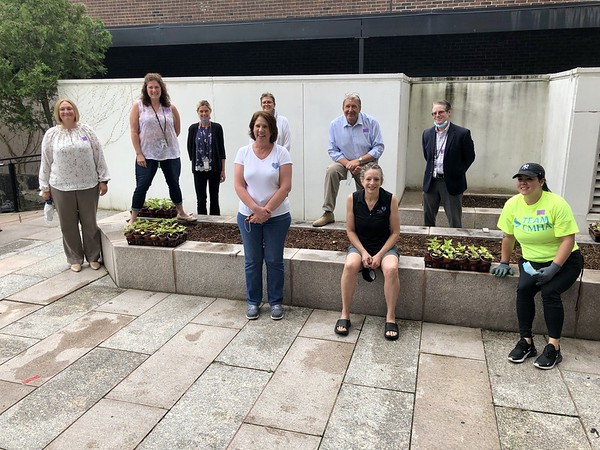 NEW BRITAIN – Though it was not the bright, sunshiny Friday morning they had hoped for, that didn’t stop Community Mental Health Affiliates, along with the Petit Family Foundation, from getting together to plant a new Michaela’s Garden.

“Dr. Petit has been a great supporter of CMHA and he and the foundation have done tremendous work in supporting nonprofit organizations, especially behavioral health. So we’re just honored that they were so generous with their gift,” said Raymond J. Gorman, CMHA president & CEO.

Gorman, along with CMHA staff, William Petit and his son, William, enjoyed some fresh air and conversation as they re-planted dozens of Michaela’s beloved Four O’clock flowers at CHMA’s 233 Main Street headquarters.

“The Petit Family Foundation partnered with CMHA for a grant this year to help with some of their space upstairs and we knew they had just taken over the building and had space out here,” said Petit, representative for the Petit Family Foundation and also part of the Connecticut House of Representatives, serving New Britain and Plainville. “So we said we’d be happy to donate some plants and get a garden out here as well because these are easy, will provide some color and people can collect the seeds.”

These annual flowers were grown by New Britain Roots from the seeds propagated from the original garden in Cheshire that Michaela and her father planted back in 2007.

“Typically you can put them in around the middle to end of May, so we’re not too far off,” Petit said. “They’ll start to flower in August and last until you get that first hard frost, so like two or three months. They have a nice scent; they’re called Four O’clock flowers, so they open based on a combination of heat and light later in the day. There’s minimal care once they get going and can get pretty big. One plant can grow two or three feet wide and tall.”

Michaela’s Garden Project was the vision of Dennis Chapman, uncle to Hayley and Michaela, who sought to memorialize his youngest niece in a way she would appreciate, and for the past 12 summers, Michaela’s beloved Four O’clock flowers have been re-planted with these seeds.

“We thought it was a good project for the foundation because it’s something you can do if you’re two or 92. Plant them, enjoy them, collect the seeds, any age can do it, and it’s simple,” Petit said. “When we envisioned this we thought we could have a project where people can grow flowers, get out and do something with their families, in their community and you can be doing something nice, simple and kind for people.”

The Petit Family Foundation honors the memories of Jennifer Hawke-Petit, Hayley Elizabeth Petit and Michaela Rose Petit by continuing the kindness, idealism and activism that defined their lives. The foundation uses the seeds and flowers from Michaela’s Garden as a basis for educational programs and to raise funds to further support their mission.

“The mission is the education of young people, especially women in sciences, helping protect people affected by violence and help people with chronic illnesses, and obviously CMHA does a lot for people with chronic conditions. There have been many people who use their services that have been affected by violence and some of the people that work here are women that are involved in science, so they hit the points of our mission,” Petit said.

A white, green and purple sign with a picture of Michaela and a statement was put front and center between some of the plants for visitors to read as they walked in and out the building.

“Their generosity to CMHA over the last five or six years has just been incredible,” Gorman said. “They were one of the largest donors for our Capital Campaign for this building, and in fact, we’re going to be naming the third floor children outpatient unit after Michaela and Hayley Petit and the Petit Family Foundation, and we’re very excited about that.”