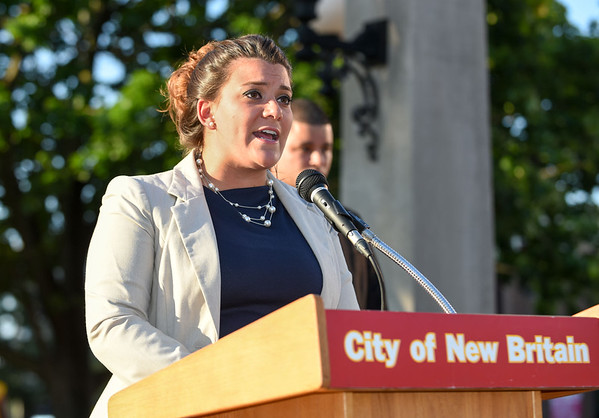 NEW BRITAIN â€“ With hopes to grow the stateâ€™s Republican Party, Mayor Erin Stewart announced Tuesday that she is relaunching her political action committee with a new mission focused on a state-wide scale.

Her committee, STEWPAC, will concentrate on electing common-sense Republicans and Stewart said it is time to grow the stateâ€™s Republican Party.

â€śItâ€™s time to win big and itâ€™s time to fix Connecticut,â€ť said Stewart. â€śAs an expectant mother, I feel that now is the best time to double-down on my commitment to the people of New Britain, the people of Connecticut, and the members of my party. We need to always have an eye towards the future, thatâ€™s why I am stepping up. STEWPAC, with its new mission, is the vehicle for me to do that.â€ť

To be a political force for good across the state, Stewart said they are committed to doing whatever they can to support the efforts of local campaigns and town committees. â€śWe canâ€™t fix this state from the outside, we need to hire better people to do the jobs on the inside,â€ť she said.

For the mayor, now is the time to play a bigger role in the future of the stateâ€™s Republican Party and to have a voice. She said there is a need to actively support common sense and like-minded CTGOP candidates, candidates who support the Partyâ€™s core values but also redefine what it looks like and what it means to be a Republican in the state.

The state Republican Party that Stewart said she is familiar with believes in small and limited government, fiscal responsibility, and small business owners. The Party also values personal responsibility, fairness, and equality under the law.

â€śThe party I belong to has values that I believe are shared by a majority of Connecticut residents: common sense, compassion, conservative budgeting and limited, but efficient, government,â€ť she said. â€śThis is the future of the party that I will fight for and help rebuild in our state. The GOP shouldnâ€™t only stand for Grand Old Party, for me it means Government Of the People,â€ť said Stewart.

â€śThereâ€™s an election in November and the time is now, Letâ€™s do this,â€ť said the mayor.