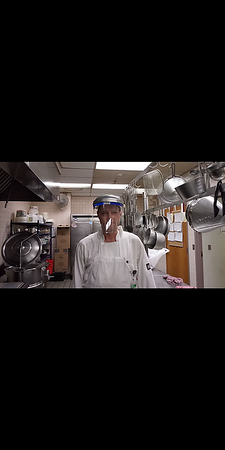 Breyana Sanchez, who does community service at the Friendship Service Center Photo Provided By Adrian Elliott Buy this photo

NEW BRITAIN – The Friendship Center hosted its 51st annual meeting Thursday morning, reconnecting virtually with one another and the community and sharing highs and lows of the year.

“Since 1968 with your help, Monsignor Farrell began the Friendship Center by feeding the people that were living on the streets. This morphed into providing a continuum of services to the homeless population in the greater New Britain,” explained the introductory video that played as guests joined the meeting.

Some guests, with their morning coffee and orange juice in hand, tapped in for the hour-long event.

“For some time now we have been starting every board and committee meeting with examples of ‘Love Made Visible,’ meaning participants are invited to share experiences that they’ve had that was ‘Love Made Visible’ to them,” said Sharon Chamberlain, president of the Board of Directors. “It helps everyone focus on something positive at the start of the meeting.”

Throughout the videos played during the meeting, guests could hear testimonies from the men, women and children, like Breyana Sanchez, a junior at Newington High School who has been doing community service at the Friendship Center. Also, some of the staff, like Dan Ryba, introduced themselves and their roles with the center, as well as some community members and officials who lend a hand.

“The board asked me to step into the role of interim because they had started the ball rolling in examining the organization, our strengths, our weaknesses and they wanted to begin to chart a new direction strategically and they’ve been working on that for just about two years now and the senior staff has been helping as well. We just keep plugging away and we’re getting there,” said Barbara Lazarski, interim executive director of the Friendship Service Center.

A staff survey was done to find out where the staff was and the things they thought were wrong with the management. The center set a course to change some of those things by hosting retreats, staff meetings and training

Finances were another area of difficulty for the center.

“The Board of Directors is taking a more active role in overseeing finances,” Chamberlain said. “We’re trying to be more honest in our expectations of what our expenses and our income look like. We applied for and received a Paycheck Protection loan. That’s all well and good, but the cost of operation during covid-19 is greater than that loan money so we are finding ways to balance that out.”

During the pandemic Lazarski said the center did not lay anyone off.

“To safely distance people the Department of Housing through FEMA we put half of our shelter residents in a hotel. A really good thing was Adrian [Elliott] started the Feed for 50 program, which really worked out,” Lazarski said.

Videos were also played of recipients who were granted an award by the Friendship Center, including Mayor Erin Stewart, who received the Ellen Perkins Simpson Award.

“I’m just really grateful to receive an award in her honor,” Stewart said. “The work that we’ve done with Building Hope Together in partnership with the Friendship Center has been nothing short of amazing over the years and I hope the partnership will continue for many years to come.”