'This industry is a forgotten, taken for granted service that needs help': Blumenthal in New Britain to help Dattco, other bus companies survive pandemic 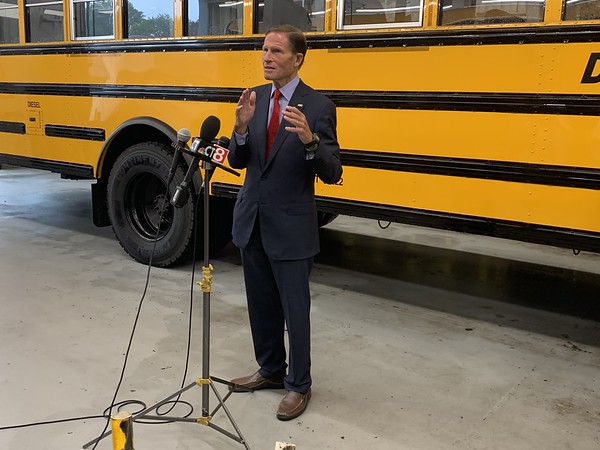 Sen. Richard Blumenthal speaking at Dattco in New Britain about working to pass the CERTS Act, which would provide relief to bus and motorcoach companies. | Matt Hornick | Staff Buy this photo
Published on Wednesday, 2 September 2020 18:10
Written by MATT HORNICK

The bus and motorcoach industry has suffered greatly amid the coronavirus pandemic, as most schools were closed and far fewer people are willing to travel with strangers.

To make matters worse for bus companies, they have yet to receive any relief money from the federal government despite stimulus packages being given to both airlines and rail companies. That is why Sen. Richard Blumenthal visited Dattco in New Britain Wednesday, to discuss the Coronavirus Economic Relief for Transportation Act, a bill he is sponsoring that would provide the relief this industry is looking for.

“This issue really is a national one because bus and motorcoach transportation are vital to our economy,” Blumenthal said. “They are the lifeblood of our transportation system; they are essential infrastructure. They’re the kind of essential service that we all take for granted, until we need them. In the most recent storm, they provided a way around some of the obstacles that prevented train transportation. This industry is a forgotten, taken for granted service that needs help.”

Dattco typically transports more than 100,000 students per day in Connecticut and Rhode Island across 27 school districts with a fleet of 1,350 vehicles as well as “hundreds of thousands” of passengers traveling by coach bus. Due to the pandemic the charter division of the company did no business from the middle of March through June, which is generally their busiest time of the year.

“I was first in touch with the leaders of this company going back to the very beginning of the pandemic when they pleaded their case very effectively,” Blumenthal said. “Unfortunately, congress so far has failed to respond. And it must respond to provide essential relief so that this industry will survive. It is literally about survival. These private bus and motorcoach companies are hanging by a thread because of the uncertainty of the economy, the overhead expenses they face and the need to keep together their workforce.”

Maintaining the workforce is important, specifically when it comes to schools. In addition to being trained on how to be a school bus driver, they need to be vetted to prove they can be trusted around other people’s children.

“When things get back to normal, we want to be here; we want to make sure these highly specialized employees can stay in this job, they don’t have to go do something else,” said Kyle DeVivo, assistant vice president of sales for Dattco. “It takes months to get licensed and cleared to drive a school bus and so when things do get back to normal that we’re in place and we’re ready to answer the call.”

As schools begin to reopen, Dattco took on the additional expense of providing all of its school bus drivers with a personal protective equipment kit that includes five machine-washable cloth masks as well as cleaning supplies, gloves and protective eyewear to use when cleaning the bus.

DeVivo said the charter side of the company typically generates more than $20 million per year and from March until June the charter business was “functionally zero.”

“Our busiest months tend to be March, April, May and June with schools going to Washington D.C. or New York,” DeVivo said. “That’s when many field trips and other things happened and we saw it all go away overnight; it happened in the course of two days. It’s something that we just could’ve never prepared for from a financial perspective.”

While keeping their own company afloat is obviously most important to the people at Dattco, the survival of its industry as a whole is more important for bus companies than in other businesses. While other bus companies are considered competitors in the traditional sense, these businesses also use each other for bus maintenance because they have no other means of taking care of their busses hundreds of miles away on a trip.

DeVivo also expects the charter bus business to continue hurting for the duration of the pandemic as interstate travel is still being minimized as much as possible. He cited college athletics as a large source of revenue for bus companies that will be largely gone for the foreseeable future until traveling freely is permitted again.

Blumenthal is leading the bill in the senate along with Sen. Jack Reed from Rhode Island and hopes it can be part of the next relief package congress passes. The bill would provide $10 billion to the industry as a whole and he said it already has 28 co-sponsors on both sides of the aisle since introducing it in July.

“The bus and motorcoach industry is struggling in every state in the country red or blue,” Blumenthal said. “The airlines industry got a special relief package of $30 billion, now they’re coming for more. The reason why they asked for $30 billion so they could continue to pay their pilots and their flight attendants is because those are people with special skills, just like the bus drivers.”