Photo courtesy of Plymouth police A trailer set up to capture Buddy the beefalo. Buy this photo 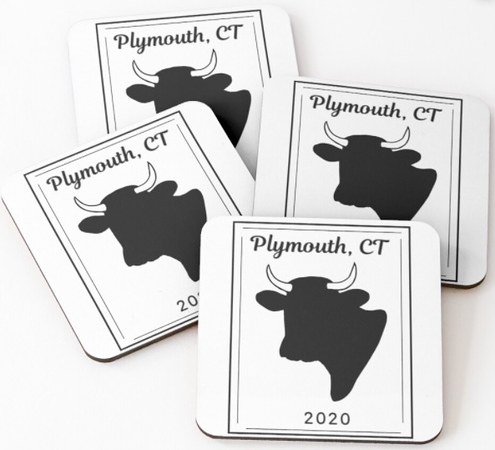 Photo courtesy of Plymouth police Buddy the beefalo spotted near a trailer set up to capture him. Buy this photo

PLYMOUTH – Buddy the beefalo has become an instant folk hero in town.

The animal, which has been on the loose since early August, has galvanized locals in Plymouth and given residents something to rally around in the midst of a global pandemic that has canceled nearly all of the spring and summer events that would typically take place.

The story of the missing beefalo – a mix of a bison and domestic cattle that, after coming to Connecticut from a farm in Massachusetts, escaped an animal processing facility in Plymouth – has become an fan favorite in town and has even raised over $8,000 to keep Buddy safe, and perhaps, save him from becoming food.

One local resident, Ashley Ann Santopietro, a 20-year-old who attends Central Connecticut State University, has begun selling “Town Beefalo” merchandise, marketing it as “The talk of the town 2020. And most odd thing that has ever brought Plymouth together.”

“It was interesting to see how an animal escaping slaughter led to the town coming together,” Santopietro said.

Buddy’s story has locals talking just about every day on social media, asking for the latest news on an animal that has eluded capture for over a month. Despite the owner of the animal promising to bring him back to a farm in Massachusetts, concern among citizens who have grown attached to Buddy prompted the Plymouth Police Union to help raise $8,500 that will be used to purchase the beefalo.

Police have said Buddy, once he is caught, will be brought to the Critter Creek Farm Sanctuary in Gainesville, Fla.

“I thought it would be a good idea to bring the town together,” she said.

Santopietro, who sells everything from shirts and masks to buttons and coasters, said she would love for residents to, years from now, stumble upon a piece of beefalo merchandise they purchased and think, “Oh, remember when that happened?”

“I think it would be cute and really cool to remember the moment during this sad time,” she said.

Santopietro, who was raised in Terryville and whose merchandise can be found through a link on her Facebook page, said despite Plymouth being no stranger to animals that escape farms, Buddy’s story has been “definitely one of the more odd things.”

Although Buddy’s story has been something of folklore status, police have cautioned the public to avoid coming into contact with the animal, as it weighs around 1,000 pounds and can be “highly aggressive.” Anyone who spots the beefalo has been urged not to approach him and to instead call police at 860-589-7779 or 911.

The animal has been spotted a number of times in the area of Route 72 and Judd Road, most notably perhaps when it put its head down and began scratching the ground as if it was going to charge at officers.

Police have searched for the animal and have had help from state conservation officers during an attempt to capture him. Most recently, police changed their strategy and have set up a trailer with grain and hay inside to try to lure Buddy in. He has been spotted in the area of the trailer, but has yet to take the bait. Police have continued extending a fence around the trailer in hopes that they will be able to contain him to the area.

Until then, the legend of Buddy the beefalo will continue to captivate the town.