Courtesy photo provided by Kelser of Fey, a Rhodesian Ridgeback draped in a Kelser orange beach towel to help with this year's fundraising efforts. Buy this photo 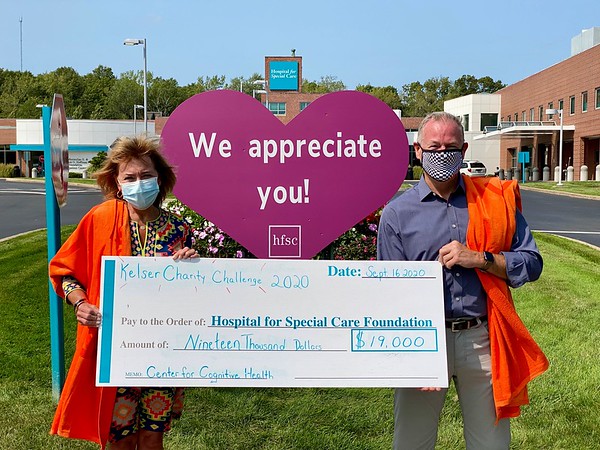 Courtesy photo provided by Kelser of Barry Kelly (right), who presented a check for $19,000 to Lynn Ricci (left), president and CEO of the Hospital for Special Care in New Britain. Buy this photo

NEW BRITAIN – Despite the ongoing pandemic that is postponing events left and right, the Kelser Corporation was still able to raise $19,000 for the Center for Cognitive Health at the Hospital for Special Care.

“We are really glad that we were still able to help raise funds during such challenging times,” said Lisa Carroll, Kelser marketing manager.

Kelser Corp., an IT consulting firm, was owned by Bruce W. Kelly. He founded the firm in 1981 and ran the company until he was diagnosed with Alzheimer’s. He then sold the company to his brother, Barry, who has been Kelser CEO since 2010. Bruce Kelly died of Alzheimer’s disease in March.

This season would have been the time when the corporation’s annual Kelser Charity Challenge golf tournament would happen to raise money for the hospital’s Center for Cognitive Health, a program the fundraiser helped launch in 2018. Between 2017 and 2019, the tournament, which includes a silent auction and helicopter drop, in which a helicopter flies over the course and drops golf balls, has raised over $70,000.

But with covid-19, Carroll said they did not think corporate-sponsored events for large gatherings would be a good idea.

Instead, back in July, the company sent a photo of Fey, a Rhodesian Ridgeback draped in a Kelser orange beach towel, to all previous players, volunteers, sponsors of the tournament, offering the towel and a matching donation for anyone contributing more than $100.

It was a simple idea that proved effective, the company said. Donations poured in, more towels had to be ordered, and when all was said and done, $9,500 was raised and matched by Kelser to total a donation of $19,000 to fund the hospital’s unique multi-disciplinary approach to treating Alzheimer’s disease and other memory disorders.

Last week, Barry Kelly presented a check for $19,000 to Lynn Ricci, president and CEO of the Hospital for Special Care in New Britain.

With the support from Kelser and numerous local organizations, the center has the ability to allocate resources from neuropsychologists, occupational therapists and speech language therapists to go through evaluation, intervention and treatment with the patients, as well as being able to cover the growing numbers of patients coming in, according to hospital center officials.

Hoping to bring back the golf tournament next year, Carroll said this is extra important because fundraising has become even more challenging with the limitations that are imposed by the pandemic.

“The hospital usually has a lot of fundraising events but they’ve either had to cancel or figure out virtual ways to do it, which brings in less money,” Carroll said. “That’s why this is so important. Obviously we love our events because we get to socialize and have fun, but at the end of the day it’s for a reason and we want to keep that reason going.”