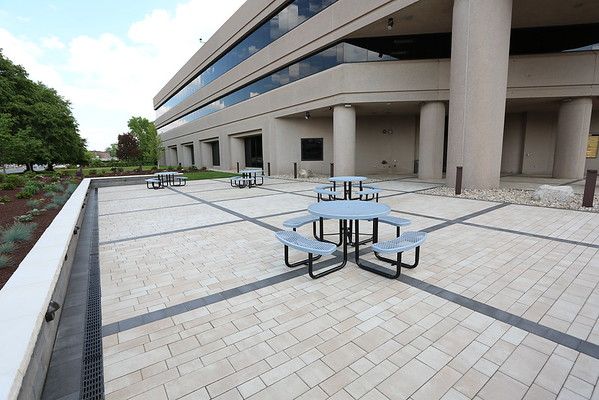 NEW BRITAIN – Tomasso Brothers Inc. was awarded the New Britain Downtown District Clean Campaign “Tidy Town” award Tuesday afternoon in recognition for its work on the new patio at One Liberty Square, which has been offered as a community resource for groups to gather and celebrate.

“The Tomassos have been so generous and so supportive in the city of New Britain,” said Justine Moriarty, chairwoman of NBDD. “The way that they have maintained their building and that beautiful patio just goes to show their dedication to the city.”

For three generations, and now into their fourth, Tomasso Brothers Inc. has been deeply rooted and has helped the city grow, improve and excel, continuing to achieve the district’s mission to support the city’s investments by creating a beautiful, safe and thriving downtown through improvements, marketing, advocacy and collaboration,

“We as the Downtown District wanted to recognize them for all that they do,” Moriarty said.

“On behalf of the entire Tomasso Group we appreciate being recognized for our efforts in providing a beautiful place for not only the tenants of our building, but for others to enjoy,” said Bill Tomasso, president of TBI Construction. “Our company will continue to invest in the city of New Britain. We are proud of this award and also proud to have called New Britain home since 1923.”

The Downtown District created its Clean Campaign to bring awareness to self-pride in keeping downtown clean and inviting.

“We also want to applaud Gerry Amodio and the Downtown District for their efforts in highlighting the good work that businesses are doing to make New Britain such a vibrant city, as well as Mayor Erin Stewart for her downtown investment plan, which is truly making a difference,” Tomasso said.