'We don't know if we're giving out candy yet': Area residents still in Halloween spirit, even if plans for trick-or-treating are still up in air (with list of public events in area Saturday) 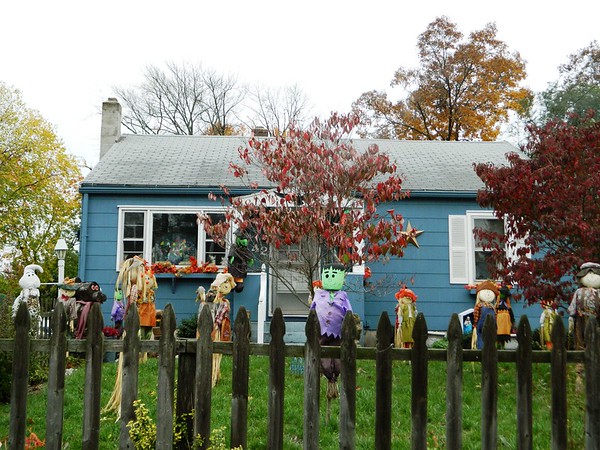 Erica Drzewiecki | Staff A home decorated for Halloween in a neighborhood off of Roberge Road in Bristol. Buy this photo

Erica Drzewiecki | Staff Raegan and Matthew Florian look for decorations in Plainville's Spirit Halloween store Wednesday, for a small gathering they're planning at their Southington home this Halloween. Buy this photo

The pandemic is not stopping many residents of Central Connecticut from decorating their properties with witches and goblins and shopping for Halloween costumes. However, what they will do when the big night rolls around is still up in the air, as long as covid-19 is in the air.

“I want to be a great white shark!” 5-year-old Zaiden Candelaria told his mother Lisamar, as they were shopping in downtown New Britain Wednesday.

“I want to be a monster!” his twin brother Zion piped up.

Usually the boys have costumes picked out by now, Lisamar said, but they’re still not sure what their plans are this Saturday, Oct. 31. The family is at least planning on bobbing for apples and carving pumpkins inside their home.

“We’re so used to going out trick-or-treating and that’s not going to happen this year,” she said. “I don’t want to risk their health.”

The State Department of Public Health and the Centers for Disease Control and Prevention (CDC) released its Halloween guidance early in October, urging families to avoid direct contact with others while trick-or-treating, or to find alternative ways to celebrate Halloween. However, there is still no ban on trick-or-treating in place at this time.

Bristol’s Spirit Halloween store on Farmington Avenue was busy the week before Halloween, as people hunted for accessories to go with their costumes or spooky props for their front yards.

While shopping for technical equipment to run lights and sounds out of his home in Terryville this week, Matt Graziano reflected on how different the holiday would be.

“I’ve been doing a haunted house for the past 12 years,” he said. “Usually I get two to three-thousand people. I’ll be lucky if I get 500 this Halloween.”

He’s invited people to drive by his Allen Street home instead of coming inside to see the spectacle of haunts.

Bristol resident Shannon Cartier was out shopping with his daughter Katherine, 12, and son Samuel, 9.

“She’s doing a sleepover and he’s staying home with his mother at her house,” Cartier said. “I have to work.”

“I think everyone should stay inside,” Katherine said. “I’m just dressing up for pictures.”

State officials have warned residents against hosting or attending large parties on Halloween. Those that exceed 25 people indoors or 150 people outdoors could face a penalty of $500.

You can also get in trouble for being found at one of these large parties. The fine for attending a party that exceeds attendance rules is $250. Specifics on enforcement were not clear.

In a neighborhood off of Roberge Road in Bristol, stands a small blue house with evenly-spaced scarecrows sticking out of in the grassy front lawn. It would seem as if the people who live there are planning on handing out candy to trick-or-treaters this Halloween, but that may not be the case.

“We usually do even more than this but we don’t know this year,” said an older man who opened the door Wednesday. “We don’t know if we’re giving out candy yet,” added the man, who shut the door before giving his name.

Wearing masks and staying socially-distanced are required no matter what you do, according to state guidelines.

For those who still wish to provide candy to kids trick-or-treating, the CDC suggested setting up an outdoor treat station with individually bagged candies for kids to take themselves.

Anyone who feels ill or has traveled to one of the states listed on the Connecticut travel advisory between Oct. 16- 30 should refrain from attending Halloween events or handing out candy.

David and Theresa Cheever visited Plainville’s Spirit Halloween store with their son this week to look for costumes.

“We’re trying to do something low-key and safe,” David said. “Maybe a scavenger hunt in the backyard.”

Kristina Ciesielski and her niece Jenna Billie have visited the store several times already this month.

“We love it here,” said Ciesielski, who lives in New Britain. “When I was growing up I loved trick-or-treating and she’s really into Halloween, so we just come here to walk around and look.”

Southington resident Matthew Florian and his daughter Raegan also poked around, checking out the life-size animatronic dolls and other spectacles.

“Raegan and I decided to host and ‘Come and Eat and Be Merry Monster Mash’ at our house since Halloween is a little different this year,” Matthew said. “We have a group of 10 or so cousins and friends we spend time with who are coming. It will be outdoors and in the garage.”

There are lots of kid-friendly happenings across the region expected to follow state and federal guidelines for a safe Halloween celebration. Here are just a few: