'It was amazing to me when I first heard them talking with each other': Bristol, New Britain families thrilled with being able to pair children with mentors 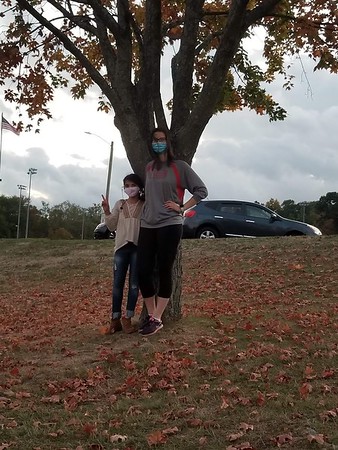 Playing chess and hanging out with a teenager wasn’t something Larry Shapiro ever thought he’d do. But since becoming a Nutmeg Big Brothers Big Sisters mentor, his life has changed for the better.

“It’s been wonderful being able to see the world through a teenager’s eyes,” said Shapiro, 67. “There’s a lot of wisdom to be learned and I was a little surprised by how much I’ve gotten back by being a mentor.”

Nutmeg Big Brothers Big Sisters paired Shapiro with Jonathan Telemin, a 16-year-old high school student who lives in Bristol. It has been three years since they first met and Shapiro said they spend almost every Saturday afternoon hanging out, having long conversations, or playing with logic puzzles until the pandemic hit.

“Until things settle, we’re keeping it virtual for now,” he said. “But that’s been great, too. We’ve watched the musical ‘Hamilton’ together and discussed the history behind it. He gave me a house tour through his laptop; we talked about gardening and doing Lego projects. Sometimes it’s just conversations, but we’d talk for hours.”

Jonathan’s mother, Karisma Quintas, 49, said she is so glad to have Shapiro in her son’s life. Especially since Jonathan is on the spectrum; so it’s usually a challenge for him to open up to strangers.

“But he loves Larry,” she said. “It was amazing to me when I first heard them talking with each other. I’ve never heard Jonathan talk so much and that makes me so happy.”

As a single mother with two boys, Quintas said life can be a struggle. Originally from New York, she moved to Connecticut with her family in 2006. After her divorce, she found an apartment with her boys, went back to school and got her undergraduate degree in psychology from the University of Bridgeport. She then worked as a paraprofessional and eventually became a care manager for the Western Connecticut Area Agency on Aging in Waterbury.

Between the commute, getting her boys to school, and working on her master’s degree at the same time, Quintas said things get a little crazy sometimes. When she realized Big Brothers Big Sisters could help, she seized the opportunity.

“I can’t be everywhere all the time. Even if it’s just a few hours, I’m so grateful that Larry spends time with Jonathan and has adult discussions with him,” she said. “He learns social skills, social cues and talks about what he wants to do in the future. It’s so amazing.”

January is National Mentoring Month, and there are a lot of reasons for the organization to celebrate. Since its founding in 1966, it has provided mentors for more than 70,000 deserving Connecticut kids. They have also managed to continue matching mentors to mentees throughout the pandemic, pivoting from in-person meetings to virtual programs.

For Dagna Cruz, 34, a New Britain mom and full-time hairstylist, being able to match her daughter, Renesmee Cruz, 10, to a Big Sister was a lifesaver.

Explaining Renesmee has special needs relating to behavior issues, such as being socially awkward and a constant attention-seeker, Dagna said they’ve tried several therapy programs through schools, religious groups and the state Department of Children and Families. But nothing worked until her mentor came along.

“At first, I thought this was just another program that we’re going to try and hope for the best,” she said. “I never thought how connected Renesmee would be to her Big Sister. She gets along with her so well, her behavior has changed and she’s getting better with her peers at school.”

Deana Sobilo , 24, who also lives in New Britain, became Renesmee’s Big Sister last summer and started off by doing Zoom chats. She said the virtual platform served as a great tool to get to know each other before meeting in person.

“It was nice to be able to get comfortable with each other at first. So once we met in person, she loved it. We would do homework together, play board games, and other fun activities,” said Sobilo . “We also met a few times at the park to get some fresh air and I would play on the playscape with her.”

The best part about the relationship is being able to be there for the child, she continued.

“It’s so good for kids to have someone older and outside of the family to inspire them, whether it’s a new hobby or pursing college,” Sobilo  said. “I’ve always had positive mentors to guide me along the way. So I think it’s really important to expose kids to that same positive influence and this is my way to give back.”

For Dagna, she feels very much a part of that relationship and believes mentorships to be an important avenue for parents and children to explore.

“Kids need that escape just like adults do,” she said. “There’s a lot of pressure from schools and families, so it’s good for kids to have that outside escape. As a parent, I’m feel completely confident and safe with Nutmeg.”