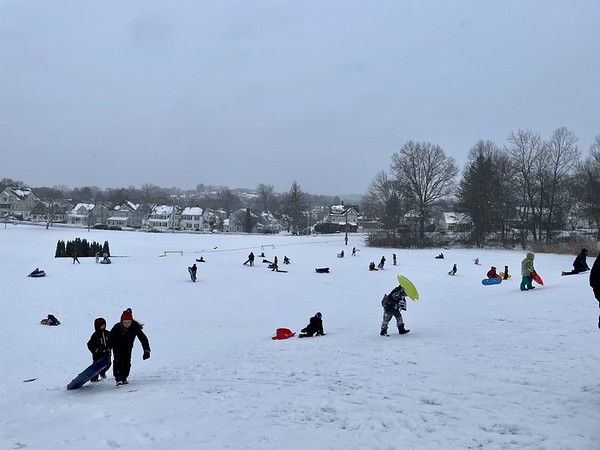 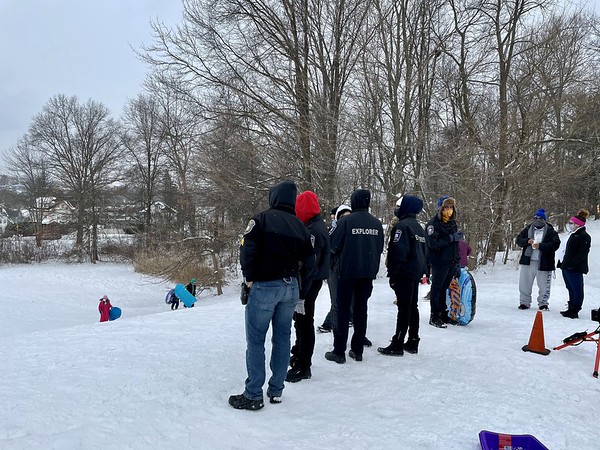 (on the right) Jennifer Perez, resident from Hartford; (on the left) Jennifer's kids and her daughter‚Äôs friend. Photo Provided By Ciara Hooks Buy this photo 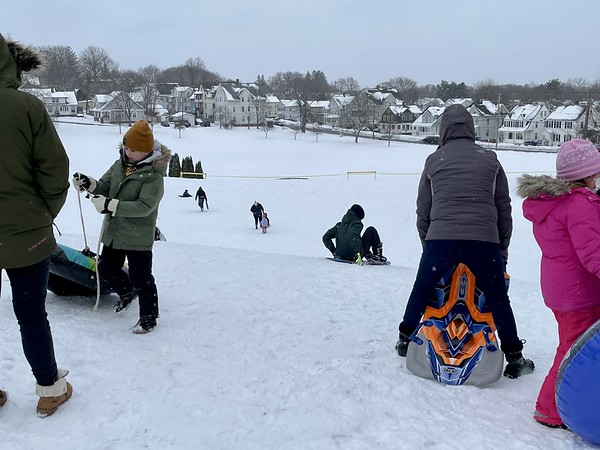 NEW BRITAIN ‚Äì While the city didn‚Äôt get much snow from the expected storm Friday, it did turn out to be just enough accumulation to set the backdrop for an awesome Winter Sled Festival.

‚ÄúWhat we wanted to do is just reach out to the community, especially the kids. It‚Äôs been a tough winter so it‚Äôs our chance to give back to them,‚Äù Police Chief Christopher Chute said. ‚ÄúIt‚Äôs a perfect day for it. It was remote learning in New Britain today, the snow is falling, the conditions are perfect, so it‚Äôs a great way to get outside and spend some time with our officers.‚Äù

Within the first hour the hill at Walnut Hill Park adjacent to Hart Street was full of kids and adults masked up, bundled in their warmest winter garb with sleds in hand.

‚ÄúWalnut Hill Park is one our greatest treasures in the city, especially in the winter,‚Äù Mayor Erin Stewart said. ‚ÄúThis is a fun activity for those in our community to enjoy together.‚Äù

Music filled the air as everyone simultaneously hopped on their sleds and plummeted down the hill, some super-fast, some super-slow, some very graciously and others not so much. There were, of course, a few sledding casualties.

‚ÄúThe mayor posted about this on her Facebook page and I saved it,‚Äù said Jennifer Perez, resident from Hartford who brought her kids and her daughter‚Äôs friend. ‚ÄúIt‚Äôs been a long time since covid; they‚Äôre not doing a lot of community events and I always take the kids. I was going to take them sledding at Elizabeth Park, but I saw this and I said I rather come over here. The kids are enjoying it; it takes them out of the house from being in there all day.‚Äù

The children with Perez unanimously agreed they were having a good time and this was their first time sledding. One of the boys said he doesn‚Äôt really like the winter, but decided to come and it turned out to be a great day.

Jessica Bengtson, a resident of New Britain, said she saw one of her friends on Facebook post about the event and wondered what it was about so she called town hall. She brought her daughter, Katalina, and her nephews.

‚ÄúI wondering how the heck they were going to sled at 7 o‚Äôclock at night and I can see it now they have the lights and everything; it‚Äôs so incredible and nice of them to do this,‚Äù Bengtson said. ‚ÄúI usually take my daughter sledding off South High Street at the old Smalley School. I forgot about this hill.‚Äù

Katalina said she was having a good time and had gone down the hill a couple times already and fell.

Free food like hamburgers, hot dogs, chips, hot chocolate and water were provided to everyone.

‚ÄúThe turnout is great we‚Äôre only a little bit into it and we have a lot of people so far and I keep seeing them pulling in,‚Äù Chute said. ‚ÄúWe‚Äôre trying to coordinate some sledding activities with everybody in the neighborhood.‚Äù

The Police Explorers were at the event as well to assist with anyone‚Äôs needs and the distribution of food.