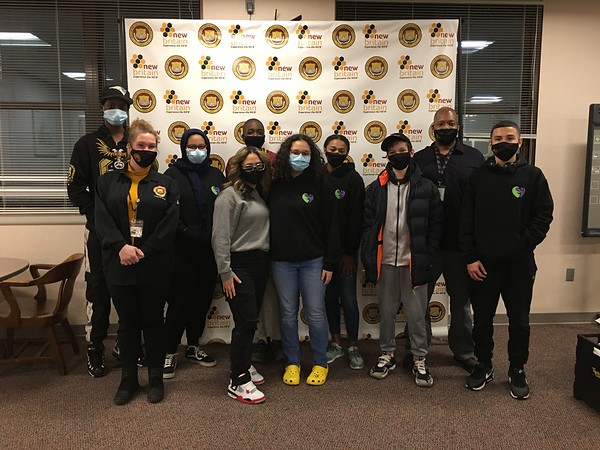 “For such a long time, kids don’t feel like they can say anything because people don’t count our voices and opinions as important. But we do have a voice and we’re all here to use it and to represent our communities to make change,” said Analise Jones, 12, a HALS Academy student.

The New Britain Youth Council, formed in January 2020, is making their presence known and expressing their thoughts both as individuals and as a group. Formed under the umbrella of NB Recovers, which includes city initiatives for substance use prevention and youth prevention, the youth council involves members from across the city’s middle schools and high school for each school to have at least one representative.

There are currently eight members with the hopes of increasing to 12 members in the near future. The students are nominated through community partners, school officials and youth and family commissioners. Every member must apply to be a part of this initiative.

“We’re here to serve as our schools’ representatives to take issues and concerns to people in higher positions in the city to advance for change,” Analise said. “There’s a lot of pressure for us to help make everyone happy. But as a group, we’re happy working together and it’s a safe and easy space to work in.”

Since the council’s formation, they have worked on campaigns that highlight substance abuse awareness, promote youth entrepreneurship at the city’s summer farmer’s market, and ran a month- social media campaign focusing on the testimonies of afterschool program providers and participants.

Next up, they are working on an anti-gambling public service announcement with Axim Design and anti-smoking ads to put up in local city parks and public spaces.

Malia Burgos, 12, a HALS Academy student said she learned a lot about gambling through their in-depth research into national and state statistics.

“I was surprised at how much it affects youth and teens,” she said. “I don’t really know anyone who gambles so it was really interesting to see that it actually affects a lot of kids who are my age.”

Her fellow council member, Amna Ali, 17, agreed. Amna also shared it was important for her that they were working on the anti-smoking ads for public spaces because it affects the local community.

“It’s good that we’re making signs for parks because people smoke there and it affects the kids playing on the playgrounds,” she said.

The integration of youth voices is incredibly important to both Israel Dandrade, 13, a Pulaski Middle School student and Daniel Senior, 14, a freshman at New Britain High School. The two students agreed there has always been a lot of talk about change within the schools, but no one has actively stepped up to the plate.

“I think that happens a lot because people are afraid of what other people might think of them or if they say something, how that might affect them personally,” Daniel said. “People psych themselves out by the pressure or so it’s good that we can be a voice for them.”

“Just by us being here, I think we can help a lot of people,” he added.

For Israel, he is excited for some of the council’s upcoming activities, including meeting with Mayor Erin Stewart to talk about issues that they can have a say in. When asked what kind of issues they want to be involved in, Israel said they just want to make sure that the youth are being heard.

“A lot of times the youth don’t have the chance to project what they feel, we’re here to make sure that doesn’t happen,” he said.