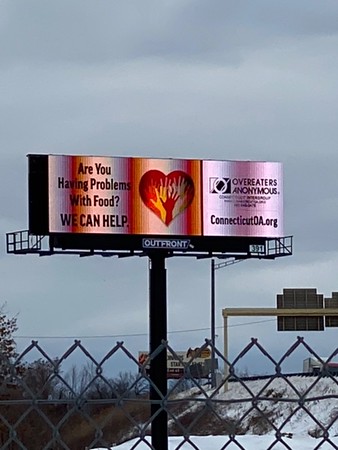 Contributed photo | A billboard on I-91 North through Hartford, promoting Overeaters Anonymous Buy this photo
Published on Thursday, 11 March 2021 10:52
Written by Erica Drzewiecki

Are you a person who eats long after getting full? Do you have a hard time suppressing constant fantasies about food? Do you overuse laxatives or diet pills?

“I was very surprised to find out there are other people like me, who could eat a whole meal and still be hungry afterwards or get more hungry the more you eat,” said Michelle N., a member of the local Overeaters Anonymous (OA) group, based in New Britain.

OA’s anonymity standards cross all levels of media, requiring publicity to refer to members only by their first names and last initials, with identifiable photographs of faces prohibited.

There are over 22 different OA meetings in Connecticut alone and 7,000 groups worldwide with more than 54,000 members. New Britain’s chapter used to meet evenings at 1 Liberty Sq. Nowadays members meet on Zoom, like almost all groups do in the pandemic era.

You might have seen a billboard on the highway recently promoting OA. There was one on I-91 north just past Hartford and another on Route 9 in New Britain, by the Ellis St. exit.

But what separates OA from other organizations is that the only requirement for membership is a desire to stop eating compulsively.

Michelle N. joined about three years ago and it’s changed the way she looks at food consumption.

“I had started to isolate and it really became a problem,” she remembered. “Coming to the program I came to understand there was a level of addiction happening.”

Since then she’s been abstaining from the overeating patterns and has lost 90 pounds.

“I’m now at a healthy weight for my height, and I’ve maintained that weight for a year and a half,” she said. “It’s such a difference not having to think about food all the time. It’s just a new way of life.”

The very first OA meeting was held in 1960 in Los Angeles, Calif. The program was designed after Alcoholics Anonymous (AA) to address the physical, emotional and spiritual recovery of sufferers through a Twelve-Step system.

Kimberly C. has been a member of OA since May 1986. She was living in Paris, France, when she joined and had been overweight to obese nearly her whole life up until that point.

“I don’t think it’s an exaggeration to say I turned to food like someone else would turn to alcohol or drugs,” she remembered. “Food comforted me; it gave me extra courage and something to celebrate. Stuffing my face would take the edge off of anxiety or fear.”

After joining, she lost 75 pounds and has maintained that weight loss since 1987.

“What OA has given me is a way to get off the merry go round of the crazy thinking,” Kimberly said. “I can turn to whatever it is that gives me serenity or balance in life instead of food.”

If you saw her out in the world today, you would never know she had a weight problem.

Amy M. has been a member for about two years now.

“It’s a good alternative to bariatric weight surgery,” she said of OA. “Even those who have had the surgery, it helps them to stay thin.”

Membership is free and the organization is not affiliated with any commercial entity, political party or religious doctrine. The website lists symptoms of overeaters as an obsession with body weight, size and shape, eating binges or grazing, preoccupation with reducing diets, starving, laxative or diuretic abuse, excessive exercise, inducing vomiting after eating, chewing and spitting out food, use of diet pills, shots and other medical interventions to control weight, inability to stop eating certain foods after taking the first bite, fantasies about food, vulnerability to quick-weight-loss schemes, constant preoccupation with food and using food as a reward or comfort.

For more information or to sign up for email updates, visit Overeaters Anonymous online at http://www.connecticutoa.org/ or email secretaryctig@gmail.com. There are weekly meetings held in New Britain, Bristol, Middletown, West Hartford, Southington, and Unionville.