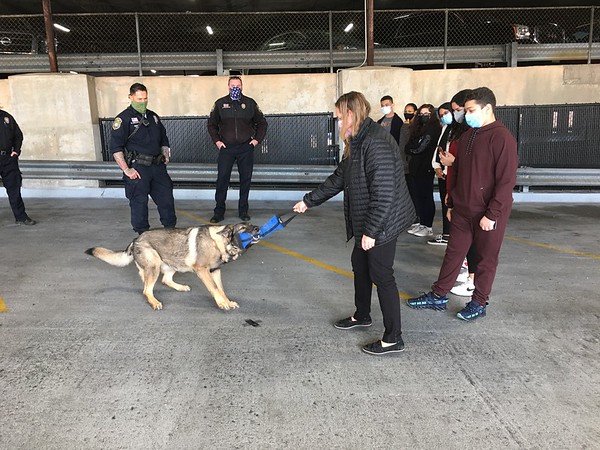 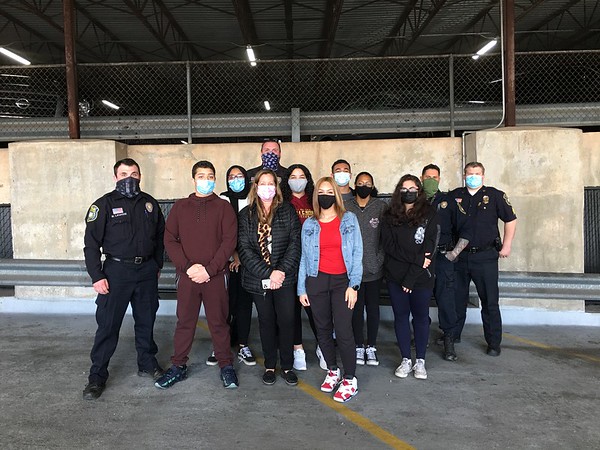 “I really want to do some good for the community,” said Rodriguez, 15. “It was cool to learn about the police in a more in-depth way and see the process of how cases work.”

The New Britain High School student is a part of the school’s academy, where three class sections focusing on police, fire and emergency medical services (EMS) are taught to junior and senior students in seven-week increments by local professionals.

At the end of its first seven-week course on the police force, the 18-student class took a field trip to the New Britain Police Department to tour its facilities, watched live demonstrations and interacted with a police dog named Pup.

“It feels good to be out here and see what the officers do,” Rodriguez said. “I got to ask questions and I’m even more interested now to be in the police force.”

Currently operating as a pilot class, educators are hoping to build the public safety sector into the New Britain High School Academies program. The academies focus on specific professional industries such as business and finance, health and science, public service, and manufacturing, engineering and technology.

“We hope for the public safety academy to serve as a bridge between health and science and public service,” said Carolyn Ganley, family and consumer science teacher. “It’s part of what we want to do to help kids advance to the next level of their life, whether it’s college or a career.”

Ganley said the school has wanted to start the academy for a while to give students more options to see if being a police officer, firefighter or emergency medical service worker would be a good fit.

“We’ve had kids express interest in all three areas so we think just the exposure alone will help them learn what works for them,” said Darlene Clark, who is a health teacher at the academy. “Especially with these choices, you don’t necessarily have to have a four-year degree so it gives more opportunities for those who don’t think college is for them.”

The classes not only benefit the students, but the teachers as well. Being a part of the program has opened Ganley’s eyes to what the police do.

“The hours they put in, how many departments there are, and all the moving pieces that make up policing. It really is amazing,” she said.

Because of the pandemic, most classes have been taught virtually with a handful of in-person sessions. With hopes to be back in the physical classroom soon, both Ganley and Clark would like to provide more hands-on experiences with the next two sessions on the fire department and emergency medical services.

Amna Ali, 17, is a part of the high school’s nursing program and joined the public safety academy because she wanted to learn more about emergency medical services.

“It’s been really cool seeing how the police department works,” she said. “I’m interested in EMS, but I think it’s important to understand how all the areas work together.”

After watching K-9 police officers demonstrate how police dogs are trained, Karina Diaz-Doran said she loves any type of public safety and wants to learn more about the different areas.

“This is such a good opportunity to dip into each department,” said Diaz-Doran, 15, who’s interested in the medical field. “It’s been really interesting to see how they all tie together and it made me more interested in being in the field.”

For Bart Wichowski, a patrol officer who participated in the course, he said it was important for the students to understand that police officers are fellow human beings.

“We’re here to help them and we’re their police department,” he said. “My biggest takeaway working with them was being able to chat, to laugh and have a good time. We used to be able to do events at the high school regularly before the pandemic. So we’re glad to have this opportunity to meet with them.”