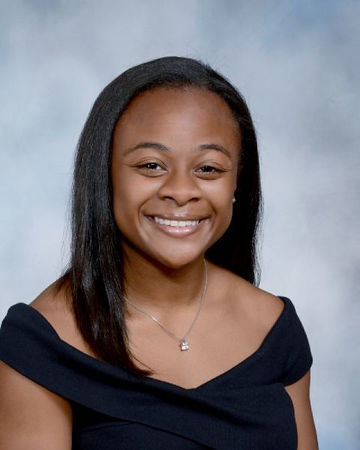 Courtesy photo of New Britain High School's Class of 2021's salutatorian Rozalyn Smith, who will be working towards becoming an anesthesiologist at North Carolina’s A&T State University in the fall. 6/16/2021. Buy this photo
Published on Tuesday, 22 June 2021 09:36
Written by Catherine Shen

NEW BRITAIN – Inspired by a healthcare class at New Britain High School, salutatorian Rozalyn Smith will be working toward becoming an anesthesiologist at North Carolina’s A&T State University in the fall.

“I was encouraged to look into engineering and thought bio or medical engineering would be really interesting,” Smith said. “I definitely want to go into the medical field and being an anesthesiologist is my current goal.”

When Smith first started to plan for college, she didn’t expect to move so far away from home. The idea came from her track coach, who thought she would be a good fit for the historically Black research university in North Carolina.

“It never occurred to me to consider historically black colleges and now I’m glad I did because I think the experience will be really interesting,” she said.

As a woman of color, Smith believes in the importance of representing the underrepresented.

“I feel like a lot more people, especially women of color, would be more involved in the STEM field when they see people who look like them,” she said. “I like to prove people wrong, especially when they say I can’t do something. There are aspects of the ‘I can do that’ philosophy that inspires me.”

Feeling nervous about leaving home, Smith said while there’s a sense of hesitancy, she knows she has her family’s full support behind her and that keeps her grounded.

“It does feel like I’m being thrown into the water, but I also did it to myself,” she said with a laugh. “But my mom also encouraged me to get out there and explore. Because she’s been in Connecticut all her life, she felt it was important for me to get out of my comfort zone.”

Smith kept herself busy throughout her four-year career at New Britain High School. She was involved in track and field, marching band, the African American Club and the Honor Society while balancing several advance placement courses and community volunteer work.

The whirlwind of pandemic-related changes allowed the graduating senior to adapt and adjust to new situations.

“The whole experience really helped me deal with expectedness,” Smith said. “Which I guess kind of came at a good time because I’m leaving home and jumping into a completely new environment. But it’s exciting. It took a lot of work to get to this point so I’m more excited than anything else.”

Spending the last few days as a high school student in reflection, Smith said she will miss many aspects of her high school life, including spending time with her friends.

“I’ve been thinking a lot about all the things that has happened over the last few years and it just felt like it’s gone by so fast,” said Smith, who was also able to maintain the same core group of friends that she met during freshman year. “I know I’m going to miss a lot of my friends but I’m definitely ready for my next new thing in life.”