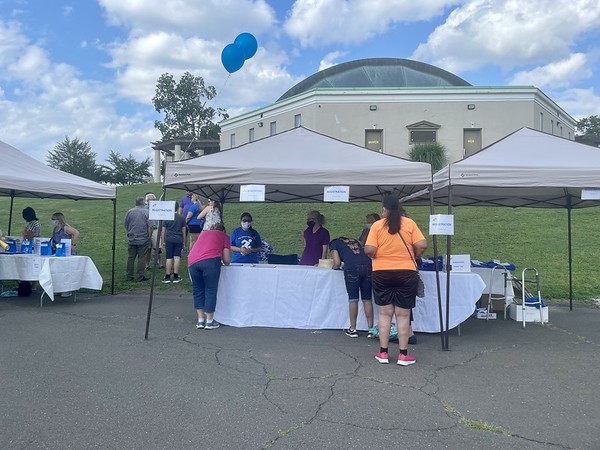 The Commission on Persons with Disabilities handed out plaques to sponsors to honor their generosity. Photo Provided by Ciara Hooks Buy this photo

The Commission on Persons with Disabilities handed out plaques to sponsors to honor their generosity. Photo Provided by Ciara Hooks Buy this photo

NEW BRITAIN – Though the event had to be postponed last week due to the inclement weather, it turned out to be a bright and beautiful day for the City’s Commission on Persons with Disabilities 13th annual Ability Walk & Roll Wednesday.

“It’s about really raising awareness of the abilities of persons with disabilities, as well as celebrating the 31st anniversary of the ADA,” said June O’leary, disability services advocate for the city of New Britain.

The event took place at the Darius Miller Memorial Band Shell at Walnut Hill Park. Participants hit the registration table behind the shell ready to receive their special-made T-shirts and raffle tickets where they were able to enter to win a ton of cool prizes.

“People are walking or rolling depending on their abilities or disabilities,” said Melody Rivera, a commissioner for the Commission on Persons with Disabilities. “It’s nice to have everyone here, especially after the bad weather last week. It was nice to give away some shirts, have everyone participate in the raffle. It’s nice to be more united and show people that people with disabilities can still do simple things and I’m really proud of the progress we’re trying to make here; it’s great.”

About 250-300 participants partook in the event. Many could not make it due to other commitments including Mayor Erin Stewart and the Petit Foundation.

“I’m very proud of the turnout; we’ve had some pretty large teams, too,” Rivera said.

The Commission on Persons with Disabilities handed out plaques to sponsors for their generosity.

“Events like this cost money and without our sponsors we just couldn’t do it,” said Eric Barbieri, Parks, Recreation, and Community Services director.

A host of vendors like the ADACC, Something Beautiful, Relay Connecticut, Amato’s Toy and Hobby, Autism Support and Resources and Healing Hoofbeats of CT, Inc lined the walkway of the front of the shell. Guests were able to stop by and get more information and even purchase items.

“We have 42 booths tonight. That is a record, that is unbelievable,” Barbieri said.

Guests could also enjoy a show by Amazing Andy, popcorn, cookies and ice cream. And those who stuck around enjoyed the Music Series Concert performance featuring Timmy Mia Experience.

“I want people to know that the Commission works very hard. We think it’s very important that people with disabilities are recognized in the city of New Britain for their hard work and just doing the best we can to work together and make New Britain a better place,” Rivera said.

“It’s been getting bigger every year. I remember when this was just a little thing and it’s real big now,” said Brian Mooris, a past commissioner.