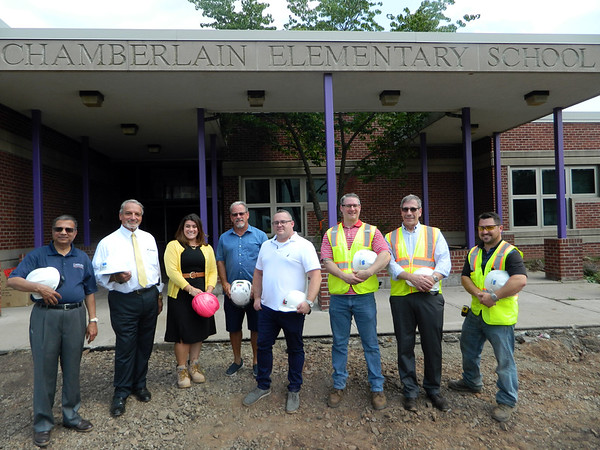 Erica Drzewiecki | Staff -- A classroom in the old Chamberlain School building, built in 1951. The school is being renovated as new. Buy this photo

Construction manager Newfield Construction and architect Kaestle-Boos met with city officials Wednesday to tour the school, where site work and demolition for the renovate-as-new project began this summer.

New Britain benefitted from a state package last fall that ensures funding reimbursement of 95% for this project, through the state’s school construction grant program.

The building’s footprint will increase by about 17,000 sq. ft. to an estimated 107,000 sq. ft. on the 8-acre property, but will certainly not encroach on the surrounding neighborhood. In fact, officials said, one of the project goals is to improve accessibility and ease traffic congestion around the school, which abuts Newington Ave., Chapman St., Sunset Ave. and Market St.

“One of the problems with Chamberlain is the site layout is not ideal,” Mayor Erin Stewart said. “There are issues with parking and school buses blocking the street.”

Chamberlain School was built in 1951, two decades before New Britain bussed kids to and from school.

“These were all walking schools up until 1972,” said Director of City Support Services Paul Salina, who had a long career with New Britain Schools. “Now every time we renovate a school we’re very conscious of school bus entry and exit-ways and parent drop-off areas.”

Once the renovations at Chamberlain School are completed, there will be designated parking areas on both sides to relieve traffic congestion on perimeter roads.

Chamberlain’s 500 students finished off the 2020-21 school year and will be starting school again this fall at the former Pope John Paul School II on Farmington Avenue for the two-year duration of construction.

Chamberlain is set to reopen in fall of 2023.

There are 10 elementary schools in the Consolidated School District of New Britain (CSDNB) and the most recent to receive upgrades were Lincoln, Gaffney and DiLoreto, according to School Building Committee Chairman Tim Stewart. This concluded the district’s2020 School Renovation Plan.

“There has not been a long-term vision for school renovations since then,” said Stewart, who has asked the district to come up with a cohesive road map of projects moving forward.

City Alderman Robert Smedley was another driving force in identifying the need for improvements at Chamberlain. He estimated that energy efficiency upgrades will render significant savings in utility costs, at 20% or more.

Among the planned renovations and upgrades are a new roof, family resource and health center as well as a dedicated wing for deaf and hard-of-hearing students throughout the district.

Handicapped-accessibility is another priority and all restrooms, doorways and other areas will be brought up to code.