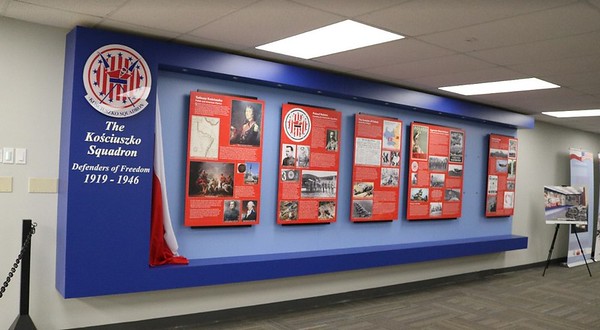 Courtesy photo of the new exhibit that will honor Kosciuszko Squadron pilots that is a collaboration between New England Air Museum and Central Connecticut State University. 8/26/2021. Buy this photo
Published on Friday, 27 August 2021 10:23
Written by Catherine Shen

NEW BRITAIN – Honoring the heroism of Kosciuszko Squadron pilots during both World Wars, the New England Air Museum and Central Connecticut State University is constructing a permanent exhibit to keep that history alive.

“NEAM attracts between 40 and 45 thousand visitors annually. The Kościuszko Squadron exhibit will be a welcome addition to the museum and a reminder of Polish patriotism and heroism,” said Ron Katz, museum director of Advancement and External Relations.

The display will trace the squadron’s history from its creation in the late 1919 by a group of American volunteers to repay the renowned Polish engineer and military leader Tadeusz Kosciuszko for his help during the American Revolution.

“During World War II, Squadron 303 further distinguished itself during the Battle of Britain by downing a record number of Nazi planes, earning itself deserved respect as Defenders of Freedom, the theme of the exhibit,” said Dr. M.B. Biskupski, holder of the Stanislaus A. Blejwas Endowed Chair in Polish Studies at CCSU.

This is a unique opportunity for history buffs, aviation history lovers, and new learners to become familiar with one of America’s most loyal European ally – Poland, and the exhibit will help people understand why.

Carl Cruff, a volunteer docent at NEAM said the way the history is interwoven with the story about this fighter squadron group is very interesting and will appeal to a lot of people, especially since there is such a huge Polish community in the state.

In brief, Poland was locked in a struggle with Communist Russia in 1919, and the Kosciuszko Squadron, named in honor of the great Polish military strategist Tadeusz Kosciuszko, was formed with the help of American volunteers.

A generation later, the world was at war again, and the stakes were high. Poland had already succumbed to German and Soviet aggression, and the Kosciuszko Squadron, now all Polish, was sidelined, according to the museum.

Eager to help the allies gain an aerial advantage, the group agreed to fly and fight under British command. They defended Great Britain against German aerial assault in the decisive 1940 Battle of Britain, and Cruff said without the battle, it was a good story. But with the battle, it became a great story.

“The fact that they were able to turn the tide of history, people will love learning more about it,” he said.

The exhibit will have uniforms, numerous fighter plan models, aircraft nose art, a pilot’s journal, and a Merlin engine that powered the squadron’s Spitfires. A touchscreen kiosk will also offer visitors detailed profiles of the pilots and their plans.

While donors continue to offer more artifacts, educational programs and speakers will bring the exhibit to life throughout the year for school and college students, according to the museum, whose goal is to engage students and connect them to Polish history.

The exhibit design and construction is led by an organizing committee of CCSU and NEAM leaders supported by a 12-member international honorary council of Polish organizations and government officials, according to the museum. Fundraisers are planned for the future and area Polish community members and organizations are encouraged to donate.