'I think it's absolutely amazing': Members of New Britain NAACP greet students at Jefferson Elementary on first day of school 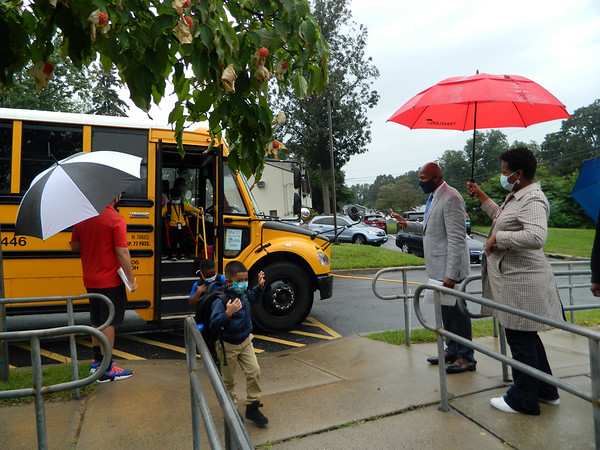 NEW BRITAIN – A kindergartener at Jefferson Elementary in the 1980s, city native Torrence Conaway would have appreciated a friendly greeting from members of the New Britain Branch of the NAACP on his first day of school.

Now a member himself, Conaway stood at the bus drop-off area Wednesday morning, umbrella in hand, to greet students as they arrived for the first day of school. He was joined by nearly a dozen fellow New Britain NAACP members to deliver support with a smile.

“I graduated from fifth grade here,” Conaway said. “I remember getting off the bus here when I was a kid. I would have felt excited to see people who look like me – especially males…males supporting kids in this way.”

New Britain NAACP President Ronald Perry Davis sent out a flyer to members and local residents inviting them to join in the event entitled “Black Men to Action.” Due to a death in the family, Davis was unable to make it.

Members of Peace Missionary Ministries James Bernard Dorsey and Samuel Simmons showed up to Jefferson well before the buses began to arrive. They’ve done this for at least the last five years.

He waved to kids as they hopped off the school bus, anxious to see their teachers and classmates.

“The NAACP accepts Jefferson as its school if they need something during the year, like school supplies, anything,” said Simmons, who serves as treasurer of the local branch. “Whatever we can do to support them we do our best. These kids will be our future leaders someday.”

“I think it’s absolutely amazing,” Lewis said. “It’s very empowering, not only for our school but for the entire community. It makes me feel great because I have this strong backing behind me.”

“We’re here to let these kids know their education is important and we’re here to support them through it,” Barger said. “We just thought it would be very impactful for students to see black men and women lining the sidewalk as they came in.”

Buses arrived a few minutes late due to the weather and an unexpected increase in parent drop-offs, but the group was positive and cheerful as they greeted students of all ethnicities and colors.

“Even in the rain it’s so good to see all the smiling faces,” former mayoral candidate Veronica DeLandro said. “We’re wishing them the best of luck for the new school year, hoping for some kind of normalcy.”