'As a mother, that is a shame': Parents not happy with New Britain school officials' communication about fighting, other problems with them 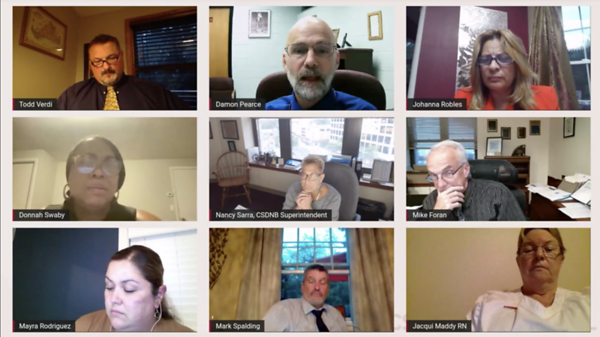 New Britain High School Principal Damon Pearce, in partnership with the Consolidated School District of New Britain, released a statement informing parents of plans to deal with a number of students who exhibited behavioral issues. After spending a day in remote learning, students returned to school Thursday on an early dismissal schedule.

“Today was super positive for our NBHS students and staff. The plan we implemented had an immediate and positive impact on the climate of our school,” Pearce said in the release.

In the letter, Pearce said he met with the Campus Safety Team, including the campus safety officers, to identify students who were out of compliance during school hours. In a meeting with associate principals and deans, student’s grades, attendance and “prior discipline incidents” were reviewed to determine the next steps. Pearce said the consequences were specific to the student and ranged from detentions, to suspensions and scheduled expulsion hearings.

“This problem-solving session with students allowed the administration to understand the needs of each child. For example, some students struggled with their schedule and needed additional assistance, while others attempted to skip class,” Pearce said. “While this is a time-consuming process, we are committed to responding to each child in a manner appropriate to their needs and behaviors.”

In a previous statement, Pearce said the more than 2,000 students who haven’t been in the school for close to two years, were having a hard time adjusting. In the Thursday letter, Pearce thanked NBHS staff and students who came to school ready to learn.

Behavioral issues were a topic of discussion Wednesday night at the superintendent's Town Hall and later at the Common Council meeting. In a Facebook livestream Superintendent Nancy Sarra addressed the early dismissal, bullying and systems set in place to help students. Sarra said the school district recently hired 240 personnel including social workers, counselors, teaching assistants and with special education and ESL teachers with the help of federal funding.

“I think what our families need to understand is that there's not one consequence. It's on a continuum, it's on a range from an expulsion to providing a mentor and it depends on the situation and the student,” Sarra said.

In the public participation portion of the council meeting, several parents and members of the council spoke regarding the issue. Resident Tina Santana, Board of Education member, said she wanted to address the council as a parent of a child at NBHS. Santana said she was frustrated and angry.

“Today at 6 p.m. the day after closing our schools, this is when they chose to communicate with us. I’m just telling you, as a mother, that is a shame,” Santana said.

“This has to be done. Everybody knows that your child goes to class, to school does the right thing, then all of a sudden you hear (about) fights and what's going on,” Jackson said.

Alderman Robert Smedley said he has had previous experience as manager of security and facilities for five years and he points the finger to current leadership. Smedley apologized to parents for the back and forth communication about whether or not students would return to school. He said the confusion was not fair to parents and students.

“There are ways to hold people accountable, there are methods to gain control without using force, without using the police. It's a tough situation for me to say that management has failed, that our leadership needs to take a really good look at themselves,” Smedley

Alderman Chris Anderson said the school district had to make the best decision in a bad situation. Anderson said the trend of violence in high schools is not isolated to just New Britain, referencing the bomb threat in Newington and fighting in Berlin and Bristol.

“Let’s not pretend that this is a unique failure of the New Britain Board of Ed, New Britain superintendent and New Britain High School. It does not mean that we can’t do better,” Anderson said. “We can do better and we’re going to do better. But we got to sit down collaboratively and figure it out.”