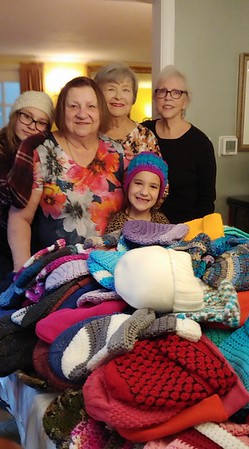 NEW BRITAIN – The New Britain Lions Club will be knitting and crocheting hats for Warm the Children.

The New Britain Lions Club will collect knitted hats and warm apparel to be donated to children in need. Club Vice President Anita Skutnik said wanted to find a way for people to donate their time this holiday season. Skuntnik said she figured knitting or crocheting was an activity that members could do in their own home, while still donating their time.

Although club members have donated their time, anyone in the community is welcome to donate knitted hats. Unionville resident Judy Bacon volunteered her time and made 100 hats to donate. Skutnik herself made 116 hats. She told her sisters of ETA Chapter of ADK International, a teacher’s altruistic sorority, about her efforts and they decided to get involved too. The sorority often does charity activities in the New Britain and Berlin communities. The group decided to volunteer too. Volunteers donated 103 hats, twelve gloves, some warm socks, and a couple of scarves. In total, more than 300 hats have been made so far.

Members of the Lion’s Club and ETA chapter will give classes to members who don’t know how to knit or crochet. Skutnik said she hopes to continue the effort again next year. Members of the public are also encouraged to learn and join the Lions Warm the Children project in the future.

“Hopefully, next year “the pebble will ripple” more and we can get even a larger number of hat donations,” Skutnik said.

The New Britain Lions will service over 800 New Britain Children with the Warm the Children Project this year. The money raised will allow parents to shop at JCPenney. Each child gets $60 for warm clothing that will be discounted through JCPenney. In New Britain Each elementary school, middle school and HRA will receive an additional allotment of money for use in needed emergency situations.