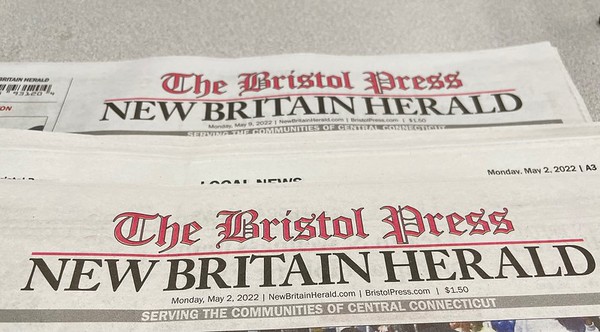 The Bristol Press and New Britain Herald will be returning to separate newspapers, according to Jody Boucher, regional publisher of Connecticut News Media Inc.

“We are happy to announce the decision to revive the Bristol Press and the New Britain Herald as their own individual community-based newspapers once again,” Boucher said. “We feel strongly that the people of each community should have a paper that is dedicated to their local news.”

Boucher also said the newspapers will be returning to the traditional, vertical fold, or “broadsheet” style.

“We are also excited to announce that our print editions will change from a tabloid-style format to a full broadsheet, giving our readers an improved experience when they pick up our newspapers,” she said.

Boucher said the planned changes will be positive for both newspapers.

“These changes will give a fresh start for Connecticut News Media and we enthusiastically embrace the opportunity to better serve the residents of these great communities,” she said.

James Drzewiecki, managing editor of the Bristol Press, said the broadsheet style was used from the Press’ inception in 1871 until the early 2000s.

“We are looking forward to Bristol having its own paper again,” Drzewiecki said. “We are also excited to bring it back to the broadsheet format; the way it used to look.”

“While not many enjoy change, I believe this is one of the few times where everyone will be happy with change,” he said. “Returning the Bristol Press to the greater Bristol community, and the same for the greater New Britain community and the New Britain Herald, as standalone newspapers, is in the best interest of our readers and for us as well. We're excited to go back to producing two separate newspapers and believe the community will embrace this as well.”