'Find something that motivates you': New Britain man, well known at area races, credits running with adding years to his life 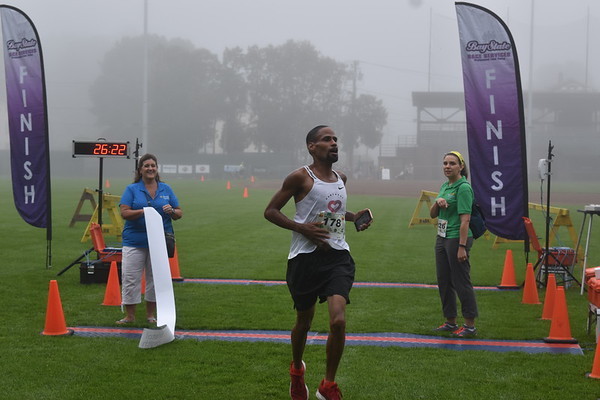 Dean Wright | Staff Mario Vazquez finishes first in the 2022 Race in the Park. Buy this photo

NEW BRITAIN – When it comes to pushing oneself to the next level, New Britain runner Mario Vazquez, 43, is all about dashing toward a finish line he’ll never stop reaching for.

A common sight at many races in the Greater Hartford area, running is one of his great loves in life.

“I ran my last year in high school,” said the lifelong New Britain resident. “Once I got out, I took about 15 years off. I was out of shape, had bad knees and everything and said enough is enough. It’s time to try this running thing again.”

The more he ran, and the more races he completed, the more he enjoyed it. His health improved and he lost weight. Starting at around 150 pounds, the runner said he’s around 110 now.

“I believe it added years to my life,” Vazquez said. “I don’t want to have any regrets. If I got back into it and I didn’t do good, it’s fine. As long as I know I put my foot in the door and tried it out and gave it a great effort, I would have been happy with that. I didn’t expect everything that came out of it.”

The competitor said he runs over 20 races a year now that vary in size. He’s taken part in 5k runs, 10k runs and half marathons. He estimates he’s been a top finisher in over 100 community races over the past 10 years but stopped counting the races he took part in a few years ago.

“It didn’t start like that,” he shared. “I was just out there running and getting by. But if you put in, like I put in the work and effort and start to love it more and more, I just proved that hard work really paid off. I came a long way.”

As part of that journey, Vazquez recently completed running a total of 730 consecutive days outdoors. He reached 733 but took a day off because of catching covid as a precaution. He said he’s missed one day in around 740 days of running.

“I change it up. There are days I do speed work and others I go for long runs,” Vazquez said. “I was averaging 10 miles a day but this last couple of weeks I’ve been hitting seven miles a day.”

Many of the races the runner attends are fundraisers for local causes.

“It’s awesome,” he said. “People expect me to be there and I will always show up for the charities and stuff like that.”

The race closest to his heart though is the annual New Britain Race in the Park. Vazquez said he took years off of running, but despite that still ran the race as much as possible, missing potentially two or three of them since leaving high school.

As part of the central Connecticut running community, he joined the Hartbeat Track Club, a competitive organization in the Greater Hartford area which seeks to provide a friendly post-collegiate team environment for those who want to pursue running while still having a professional life outside it.

“They’re a great and supportive team,” Vazquez said. “They do a lot and with charity.”

Outside of supporting area causes and nonprofits it’s hard to explain the love of running to those who don’t do it every day, he said.

“It’s just something inside you,” said Vazquez who also tries to share his enthusiasm of the activity with others.

“I want to pump people up and motivate other people, especially when it comes to races. When people see the person who won the race come back and cheer them on, it motivates them,” he said. “Just get out. It’s going to be hard. But once you get that foot in the door, you’ll go every day and keep trying. Find something that motivates you.”

Vazquez said his motivation to run was his family.

“I want to be around for them and I know this is the right way,” he said.

In the future, Vazquez said he may consider training for marathons in Boston or New York. The journey of self-improvement is never done.