FILE Dancers perform to Michael Jackson's Thriller at the beginning of the New Britain Down District Halloween Safe Zone 2019. Buy this photo 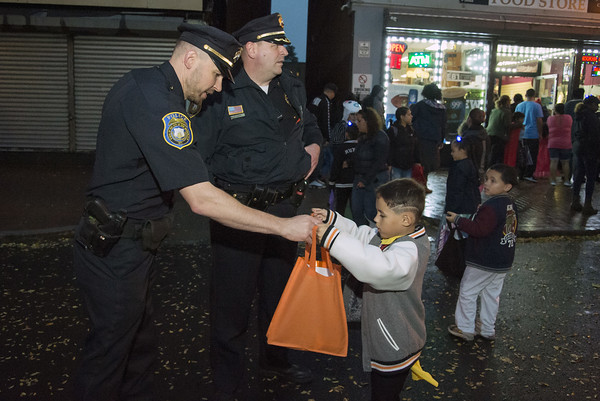 FILE Police Capt. Adam Rembisz passes out candy to a trick or treater at the New Britain Down District Halloween Safe Zone 2019. Buy this photo

After a two-year hiatus due to the covid-19 pandemic, downtown New Britain will be filled with the rustle and bustle of little trick-or-treaters looking for goodies on Halloween night, October 31.

From 4:30-7:30 p.m., with candy distribution starting at 5 p.m., children will have the opportunity to dress up in their favorite costume and stop by dozens of candy distribution locations within the identified safe zone, allowing trick-or-treaters the freedom to access a high volume of candy in a pedestrian-friendly environment.

The route will include West Main Street up to High Street and Bank Street, and then down Main Street to Chestnut Street, similar to past years.

There will be live music, performances, dance contests and more entertainment as you make your way between candy stops.

Last held in 2019 this event saw an attendance of children and families reach nearly 10,000, according to NBDD.

‚ÄúThis is the largest event that we put together and it wouldn‚Äôt be possible without the coordination and support from the Mayor‚Äôs Office, New Britain Police Department, Department of Public Works and Department of Parks and Recreation,‚Äù said Nicole Bosco, executive director of the New Britain Downtown District. ‚ÄúKeeping everyone safe and entertained while they collect a stock pile of candy is our mission and it truly is a group effort to put on a community event this size.‚Äù

In order to keep up with the high demand and provide this mass amount of candy or more the NBDD must collect in-kind candy donations and raise enough funds to purchase the supply.

‚ÄúMany local businesses and residents immediately started contributing, which shows how important this event is to our New Britain families to have a safe place to trick or treat on Halloween,‚Äù Bosco said. ‚ÄúWe are accepting monetary donations and bags of candy in the Visitors Center, as well as establishing drop-boxes in central locations.‚Äù

A list of drop-box locations will be posted on the Downtown District‚Äôs Facebook page at facebook.com/downtownnbct. The Visitors Center is located at 66 West Main Street, New Britain and can be reached by phone at 860-229-0878.