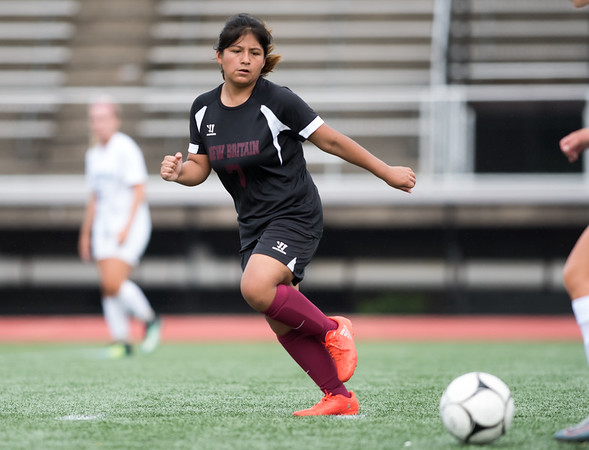 “I didn’t know what to think, who was going to coach us,” New Britain keeper Marilou Gonzalez said. “I didn’t even know if I was going to play.”

During Williams’ tenure he was 8-37-3, and while the record may not show it, Williams devoted a lot of time and energy into the Hurricanes. But many of the players did not react well to his vigorous practices.

“When I heard he was leaving, I was devastated,” New Britain senior midfielder Maya Mlynarska said. “The way I look at it, from his point of view, is he wanted to express himself without the judgment. There were certain girls that couldn’t handle [his practices]. Me, personally, I wanted that factor within a coach. He didn’t like the feedback that he was getting back.”

Mlynarska had been coached by Williams since her freshman year. She shares a special bond with him and looks up to him as a father figure.

“He’s the one who motivated me and recognized that I have a lot more potential than I think I do,” Mlynarska said. “He taught me to strive for as much success as possible. He’s even taken me through the process of recruiting for colleges.”

With Williams gone, that left the question of who will be taking over the program. The answer was actually quite simple.

Robert Pugliares has been the New Britain boys junior varsity coach for the last decade and when the position opened up, he did not hesitate.

The coaching change for some has not been easy, but the Hurricanes stayed optimistic. It’s just going to take a little adjusting.

“I think he’s a great coach coming in,” Gonzalez said. “Since we don’t have coach Williams this year, [Pugliares] has really stepped up. He’s going to get harder on us as the season progresses and we’re going to keep pushing and working together as a team. We just had to adjust to [Pugliares] because we’ve been so familiar with coach Williams and he really put the pressure on us. We came a long way with him.”

While New Britain adjusts to Pugliares, Pugliares also has to adjust to the new set of Hurricanes. After coaching a group of boys for the last 10 years, Mlynarska said that he has to realize that New Britain was a different team.

“I wish he was a bit sterner, because it is a really young team,” Mlynarska said. “I don’t blame that on him, because he coaches boys as well, but coaching girls is way different. We have different needs, different problems and different views. It’s just something that he has to adjust to. But for now he’s doing his best and I thank him for that.”