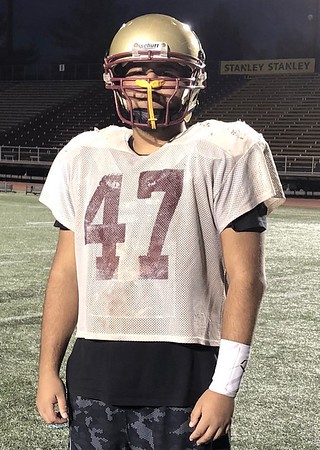 He often doesn’t talk about it unless he’s asked. There’s no real reason to he figures.

The New Britain senior wants to be known for what he does on the field. For Hernandez, there isn’t much like football. He loves almost everything about it: the physicality, the team aspect, the work.

But there was a time - a nine-month stretch two and a half years ago - when it looked like Hernandez might not have played football again.

It’s why tonight’s game, Senior Night for the Hurricanes, is going to be a special one, and not just because it will be Hernandez’s first varsity start for New Britain.

“This means everything,” Hernandez said. “I’m really looking forward to it. I just want to play. I’ve missed it so much and two years off is too much.”

It was Christmas Eve in 2015, and while most families were preparing to open up presents the next day, David Hernandez looked at the doctor at the Connecticut Children’s Hospital and asked the question no parent ever wants to ask: is my child going to die?

“It was the worst news you could hear,” Armani’s father said. “I had to ask the doctor, ‘is he’s going to be OK?’”

A little over a month earlier, Armani had been a typical teenager. He was nearing the end of his freshman season at Public Safety Academy in Enfield and seeing some varsity time on the field when a broken arm changed everything.

They’re still not sure if the bone in his left arm had snapped from hitting the turf or if had already been broken, but when it didn’t heal after four weeks in an air cast, the Hernandez’s were sent to a specialist two days before Christmas. The initial thought was it might be an infection, but a biopsy was ordered for the next day just to make sure it was nothing too serious.

It turned out to be the one word no one wants to hear: Cancer.

A tumor was discovered on his forearm and was diagnosed as Osteosarcoma - bone cancer.

“I was shocked,” Armani said. “I was scared, but I didn’t really want to show it because my mom [Becky] was there. She was pretty emotional and I wanted to be brave for her. My dad was trying to figure out the situation to figure out if I was going to be OK.”

If there was good news, it was the doctors had caught the cancer early enough to where it could still be contained to his arm. It wasn’t much longer after that Armani began his rounds of chemotherapy, which came in two types: a lighter dosage and a heavier one.

Soon, the chemotherapy - both the good and the bad - started to take its effect. His hair fell out. Sometimes it made him not want to eat for days and Armani went from 238 pounds down to 182.

The chemotherapy also made him a little edgy. He didn’t want to be around people all the time and wanted to be left alone for most of the time he was in the hospital. Part of Armani’s ulna bone - the one running from the elbow to the pinkie and where the cancer was discovered - was removed as well. All that’s there now is bone and tissue.

“For 36 weeks he went through hell,” David said. “I’ve never seen a stronger kid in my life. He’s more grown than what his age is. I can’t think of anything that’s as difficult as what he went through.”

For nine months, the weekly cycles of chemotherapy went on with each day bringing on either a new up or down. The midway point was the hardest, having come off another round of the heavy chemotherapy.

“I was just tired and not feeling it,” Armani said. “But I always wanted to be the one that was like ‘let’s keep this moving. I’m not going to give up on this.’”

That day, which had come after a tough road, came in late August, when the doctors told the Hernandez’s the news they had been waiting for so long to hear.

The cancer was in remission.

“I was happy,” Armani said. “I knew that I could overcome with the support of my family and friends. I was just happy to be done with it.”

“It was like a gift from God,” David said. “The anticipation kills you more than the results. But it was a like a giant brick was lifted off our backs. Every time we go back in for checkups we still get nervous and hope it’s good news.”

The remission also meant Armani could participate in sports again. Football, though, looked like it might be a thing of the past. But after some coaxing from his cousin, Armani began working out, trying to get back into playing shape and size.

It led him to joining the New Britain football team this season where, although he hasn’t seen the field, he has become the go-to guy the coaching staff has relied on in practice.

“He’s such a team player,” Hurricanes offensive and defensive line coach Robert Scalise said. “Whatever you need, he does. He works the scout team offense and defense to make sure we get good looks throughout the week. But what he’s gone through really puts everything into perspective. It makes any kind of bad day or any kind of bump or bruise you’re going through not that important.”

That’s what is going to make tonight that much sweeter for the senior, who goes out to practice every day just to play football.

“This young man shows us as adults a lot,” David said. “How can you ever compare? I know at my worst day, I still don’t have it as bad as he did. He’s shown us that just because you have something, you don’t give up. You can’t give up. I can’t think of someone more who deserves this.”