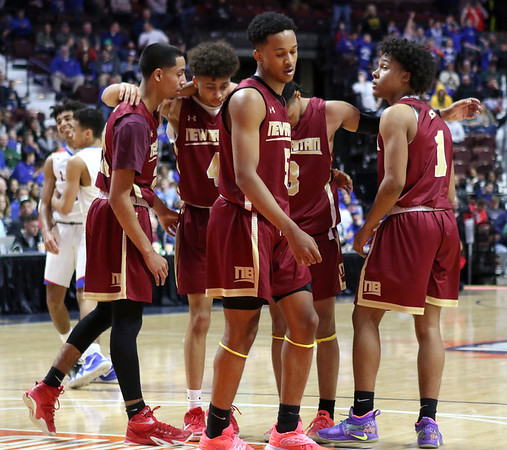 UNCASVILLE - The New Britain boys basketball team had ridden its elite defense all the way to Sunday’s Division II state championship game at Mohegan Sun Arena, but that defense faltered in key spots against top-seeded Waterford, and the Hurricanes’ magical tournament run came just one win short of claiming the program’s first state title since 1950.

“If we’re not going to do the little things to win, it’s obviously going to have an effect on the game,” New Britain head coach Kurt Reis said. “They’re a good team, but we didn’t put forth our best effort.”

The No. 6 Hurricanes kept the game close for three quarters, but the offense labored through a rough shooting night, finishing just 33 percent from the field, while the defense didn’t carry the same ruthless intensity it had during the team’s previous three games, as the Lancers won its second straight state title with a 63-56 victory, after winning it all in Division III last season.

Senior Maurice Turner led the Hurricanes (19-6) with 19 points, while Dashawn Clark added 15. The rest of the team shot just 7-for-37 from the floor, as the team cut into Waterford’s (23-1) lead multiple times, but couldn’t find the shots to complete the comeback.

“I think they’re size may have altered our shots,” Reis said. “I think it affected us going to the basket. When we went to the basket, it looked like we didn’t know what to do with the ball.”

New Britain started strong as Turner opened the game with the Hurricanes’ first seven points, including a corner three to put New Britain up 7-1, but once the Lancers took the lead early in the second quarter, they never gave it back.

The Hurricanes trailed by double-digits three different times and pulled back within four twice, but the defense couldn’t get the big stop when it needed to, as Waterford guards JJ Brennan and Kenny Hill gashed the New Britain defense for 35 combined points.

“They had 34 points in the paint, and I think the majority of that was from their guards,” Reis said. “That’s a really good backcourt they have. But that wasn’t our best defensive effort tonight.”

A 3 by Brennan gave Waterford the lead in the final minute of the opening quarter, but Bryan Thompson responded right away with a layup at the other end to tie the game at 11. Turner closed the quarter with a tough driving layup moments before the buzzer to put New Britain ahead one last time.

Six points from Ryan O’Connell in the first two minutes of the second helped the Lancers build their largest lead of the game to that point at four. The Hurricanes cut the lead back down to one entering the final two minutes of the half, but Brennan rattled off six straight points to put Waterford up seven, and finished the half with 14 points.

The Lancers pushed their lead to 10 with 2:30 left in the third, but four straight from the Hurricanes in a 10-second span pulled them within six, and a corner3 from Clark cut the deficit to three with just under a minute left in the frame.

New Britain trailed by four entering the fourth, but the Waterford opened the quarter with four straight to push its lead back to eight. After Clark tried to will the Hurricanes back with his third triple of the game, the Lancers responded with five straight, capped off by a deep three by Liam Spellman to give Waterford a 10-point lead with just 3:32 to go.

After a New Britain timeout, a fadeaway jumper from Payton Sutman gave the Lancers their largest lead of the game at 12.

New Britain once again cut it to five with just under two minutes left, but Waterford provided the exclamation point on a championship season with a one-handed slam in transition by O’Connell after a missed 3-point attempt by Turner, signaling that the Cinderella run for the Hurricanes had come to an end.

“I have to give credit where it’s due,” New Britain senior Shamah Charles said. “They’re a really good team and their guards handled our pressure. I think our defense could have been better, but I think at the end of the day we played our hearts out and came up just a little short.”