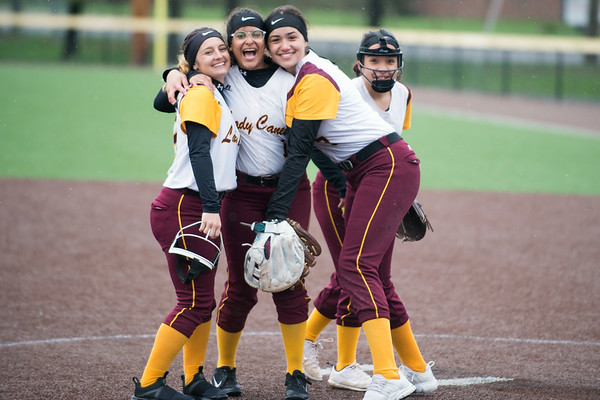 NEW BRITAIN - After the New Britain softball teamâ€™s win over Hartford Public on Monday afternoon, head coach Joel Simmone couldnâ€™t help but rave about his freshmen battery, and how vital they have been to the Hurricanesâ€™ 4-1 start.

â€śWithout these two, weâ€™re in a heap of trouble,â€ť Simmone said of starting pitcher Xandra Silva and catcher Liana Silva. â€śWeâ€™re an amazing team with these two. Theyâ€™ve come in like theyâ€™ve been playing varsity for two or three years.â€ť

The twin sisters certainly left their mark on Mondayâ€™s victory. Xandra pitched five innings of two-hit ball and Liana drove in two runs at the plate in the 13-2 rout of the Owls.

Simmone has plenty of other varsity newcomers to gloat about through New Britainâ€™s first five games, as the Silvas lead a pack of first-year players performing nothing like their experience levels would suggest before the season began. Already a quarter of a way through the season, and the Hurricanes are full of early success stories around the diamond, and it shows in their current record.

First, thereâ€™s Liana, serving as the teamâ€™s backstop in one of the most crucial defensive positions on the diamond. The freshman helped her sister and battery mate wiggle out of multiple rallies on Monday, and also catches junior ace Josleen Rivera, who is off to a magnificent start to the season with the help of Liana.

Out in right field roams senior Naeiska Perez, who went 2-for-3 with an RBI and two runs scored on Monday as she continues to thrive in her first year in high school softball. Across the outfield grass in left is junior Nataly Hernandez, also a first-year player, who drove in a team-high three runs after making a spectacular leaping catch last week to help salvage New Britainâ€™s win over Newington.

Then thereâ€™s second baseman Makaila Masterson, a senior who saw limited time as a designated player last year, but is now a mainstay in the infield. She has also swung a hot bat, ripping a trio of singles in Mondayâ€™s win to lead the team.

Mondayâ€™s 13-2 rout may have come against an inferior Hartford Public team, but it was hardly a fluke. In last weekâ€™s win against a competitive Newington team, Simmoneâ€™s core of first-year contributors combined for five of the Hurricanesâ€™ seven hits, while playing flawless defense in the field. No matter the level of competition, New Britainâ€™s young core has been up for every challenge thus far after being faced with the task of replacing six starters who graduated after last season.

The coaching staff may watch each passing hit or successful play in the field with a pleasant sense of surprise, but for the newcomers themselves, the hits and wins are just a product of tireless preparation during the winter months.

â€śYes, I really did,â€ť Xandra Silva said when asked if she anticipated such a strong start from the teamâ€™s youth. â€śWe did well in practices and scrimmages before the season started, so I knew we were going to have a good season.â€ť

Part of the young Hurricanesâ€™ early success is an ability to replace dither with dignity. This group hasnâ€™t shied away from any kind of challenge. They fully embraced their identity as leaders of a youth movement in New Britain, and the team couldnâ€™t have scripted a much better beginning behind a group that is just getting started.

â€śItâ€™s been an honor,â€ť Liana Silva said. â€śWeâ€™ve worked so hard, and as a team we work really hard. We put a lot of time and effort into this team, and itâ€™s paying off.â€ť