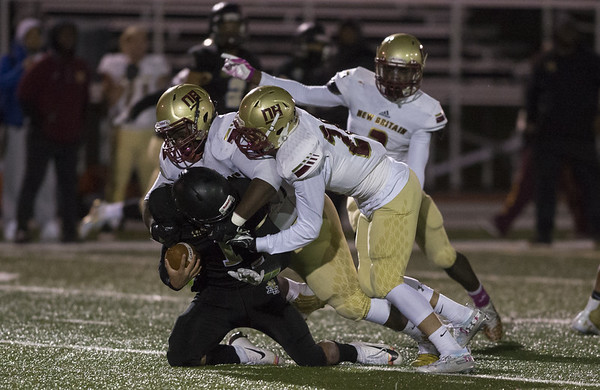 EAST HARTFORD - There were shouts and there were cheers before the New Britain football team walked off the field at East Hartford on Friday night.

It was with good reason. For just the third time this season, the Hurricanes broke down their postgame huddle with a celebration.

Behind 17 second-quarter points and a relentless defense that stymied the Hornet’s offense for most of the night, New Britain never had to play from behind and cruised its way to a 24-12 victory on the road.

“This for sure was one of our better games this season,” Hurricanes quarterback Tarik Hetmyer said. “We focused and worked really hard in practice and this was the outcome.”

It was never as close as the final score indicated.

Already up 7-0 after a 3-yard run Emanuelle Madera from the team’s opening drive of the game, Hetmyer extended New Britain’s lead to 14-0 after connecting with tight end Jayden Scott on a 30-yard touchdown pass 1minute, 2 seconds into the second quarter. An Omary Payne 3-yard run with a little more than four minutes left in the first half and a Tyree Pinnock 2-point conversion after the defensive lineman caught a wry snap on the point after and ran it into the end zone made it 22-12. The Hurricanes (3-5) then sacked Hornets quarterback Darrion Williams three plays later for a safety to bring the score to its final outcome with another 24 minutes still to go.

Both of New Britain’s second-quarter touchdowns were set up by big runs from either Hetmyer or Payne. On the drive that ended in Scott’s score, Hetmyer took the ball on the second play and cut it to the outside for a 36-yard gain. Payne then gashed East Hartford for 18-yard two plays after that.

On the second touchdown drive, Hetmyer opened up the possession with a 31-yard run and soon followed it up with a 24-yard screen pass to Payne that took the Hurricanes down to the Hornets’ three.

“We just had to come out with intensity,” Scott said of New Britain’s big second-quarter performance. “We scored in the first quarter and had an early lead, but they scored twice, so we knew if we wanted to win, we had to play and play our game.”

The only time the game was ever competitive was for a two and a half minute stretch right after Scott’s 30-yard catch thanks to two long touchdowns from Malik Bennett. The East Hartford tailback broke through the Hurricanes’ defense for a 62-yard run first and then after the Hornets recovered a New Britain fumble on the next play, caught a screen pass from Williams for a 69-yard catch and run.

The second touchdown made it 14-12 in the Hurricanes’ favor after the Hornets missed the point after on their first score and couldn’t covert on 2-point attempt following the 69 yarder.

But East Hartford (1-7) didn’t get near the end zone after that thanks in large part to New Britain’s defensive line.

The unit was constantly in Williams’ or Bennett’s face and finished the night with eight sacks - four in the first half and four in the second - that also led to two interceptions. David Gutowski picked off Williams right before the end of the second quarter, while Payne’s came at the 10:19 mark of the fourth.

“It was the fact that we didn’t want to have another loss,” said Pinnock, who was the main disrupter for the Hurricanes. “We wanted to get back on the bus cheering and have a solid ride back. That’s motivation.”

It also was the kind of performance the Hurricanes had been expecting since the start of the season.

“We came out fast, started off well and finished out the game,” head coach Tebucky Jones said. “The defense did their job. the offense ran off some clock. It was a good job.”