Medina gets better of Carr in anticipated matchup, but Southington wrestling rolls past New Britain on Senior Night 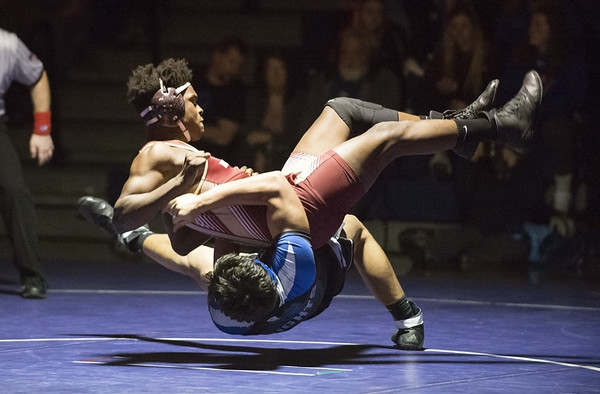 Medina’s win over Carr was the Hurricanes’ lone victory of the night (excluding forfeits), as the Blue Knights used a streak of five pins in a row to roll to a 57-9 win on Senior Night and close out the regular season with a win.

“Most of the kids wrestled pretty well,” Southington head coach Derek Dion said. “There were some technical mistakes, but they wrestled hard and they were aggressive all the way through.”

The dual meet was never close, but the anticipation through the night remained, continuously increasing until the Medina-Carr matchup, which ended with an 11-6 decision for Medina to close out his regular season with a perfect record.

“We’ve been getting up for that all night,” New Britain head coach Nick Catalano said. “Those are two really great competitors. Isaiah was ready to go.”

The Blue Knights, however, looked ready to go as a group from the start.

A Southington forfeit gave New Britain the lead to start the match, then a first-round takedown by Jacob Vecchio (285) gave the senior a 2-0 lead over Shendell James, then Vecchio picked up another in the final minute of the second round, nearly recording a pin before James was helped by the buzzer. Vecchio and James both remained upright in the third, giving Vecchio the 5-2 decision, and after a New Britain forfeit, the Blue Knights had a 9-6 lead.

Colton Thorpe (113) picked up another late takedown for Southington, earning two points with just three seconds left in the first round, gave the Blue Knights another lead, and Thorpe hung on to edge Eric Maldonado 3-1 to increase Southington’s lead to 12-6.

Anthony Del Debbio kept the run going for the Blue Knights, picking up the first pin of the night over Makhia James, who battled through two rounds before falling with 51 seconds left in the match. Emmett Vitti (132) followed with a third-round pin of his own after Luvis Ovarill fought on his back for more than 30 seconds to avoid a pin at the end of the second, but was eventually overpowered by Vitti, who extended Southington’s lead to 30-6. The pin streak reached three when JJ Guida (138) pinned New Britain’s Max Negron in the final minute of the third round to put the Blue Knights in complete control.

Caleb Brick (145), fresh off of his 100th career varsity win, kept the pins coming for Southington by defeating Josue Rosario less than a minute into the first round, and teammate Dawsen Welch (152) followed with another quick pin to make it 48-6 Blue Knights, who had rattled off five straight wins via pin.

“We were really streaking there in the middle,” Brick said. “That’s the strength of our lineup. It’s good to get that morale boost and get the energy going. It felt good to be a part of an impressive streak like that.”

After Josh Vitti (160) defeated New Britain’s Andy Mensah by decision, Jackson Rusiecki (170) put Southington back in the pin column, defeating Jabari Destine in the final minute of the second round.

In the premier bout of the evening, Medina grabbed an early 4-0 lead over Carr, but Carr recorded three straight points in the second round, then later recorded a takedown in the final minute of the round to tie the match at five. Medina answered with a reversal to grab a 7-5 lead, and controlled the third round to pick up New Britain’s lone win of the night, but a meaningful one for Medina.

The Hurricanes failed to pick up a team win, but closed their regular season with matchups against Simsbury and Southington, two of the top-six teams in the state, per the most recent coaches poll.

“We definitely have an idea of what it takes to be a really good wrestling team,” Catalano said. “Those are established programs and that’s where we want to be. It’s good for them to see that kind of competition.”

Ryan Chichester can be reached at (860) 801-9054 or rchichester@newbritainherald.com