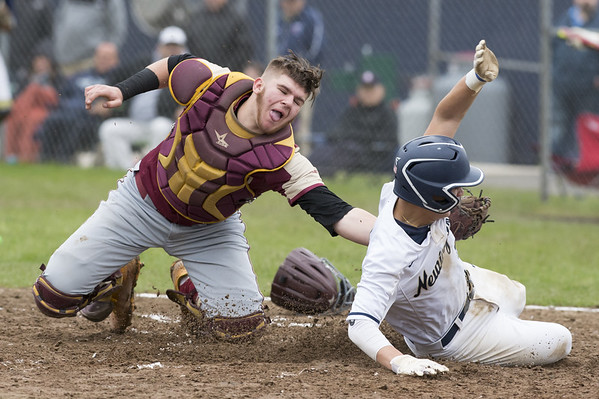 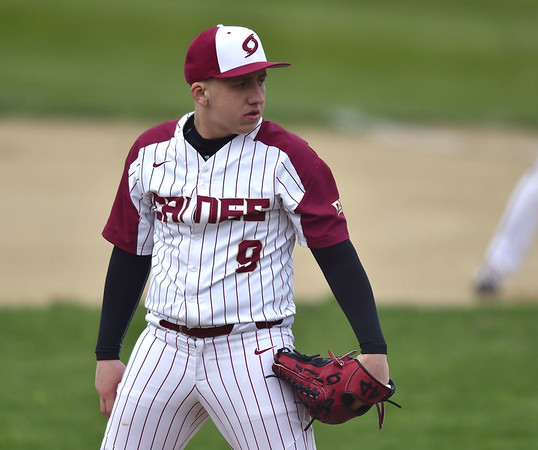 New Britain and Southington baseball played to a 2-2 tie in the bottom of the 10th inning before the game was postponed due to rain. Justin Adorno (2). Wesley Bunnell | Staff Buy this photo

NEW BRITAIN – The five seniors on the New Britain baseball team would have much rather celebrated Senior Day prior to a baseball game, but on Sunday afternoon, the Hurricanes made sure to honor their soon-to-be graduates in their own unique way.

With parents, coaches, school administrators and alumni looking on, Daniel Costa, Justin Adorno, Michael Gajda, Isaac Burgos and Jonathan Hernandez were all celebrated outside Beehive Field for their own Senior Day, making the most of a disappointing situation where their senior seasons were canceled due to the coronavirus outbreak.

“I know they wanted to play one last time together, but adversity hits us and we have to make adjustments,” head coach Roberto Mercado said. “That's life, and I know they're going to be better for it. But it was an awesome day with great support for the community. It was a lot of fun with a lot of smiles.”

The event was originally scheduled to be a drive-by acknowledgement, with Mercado, the five seniors and their families standing outside Beehive while members of the community drove past and beeped their horns in acknowledgement. But the group of fans and loved ones instead got out of their cars, kept a safe distance and watched as each senior was given gifts, posed for photos and listened to speeches acknowledging their contributions to the program since arriving at New Britain High School.

“It's not an active street by Beehive, so people were all around the place talking to the kids,” Mercado said. “We had the parents and players along the fence, and everyone else was by the gravel parking lot by left field. We just talked about every player, and it worked out great.”

After the speeches and photos, the original drive-by plan unfolded, waving goodbye to the five seniors that made up one a class that was historic for the Hurricanes in terms of the time they put in to the baseball team.

“This might be my first senior class where all five seniors were part of the program for all four years,” Mercado said. “That means a lot. Those five guys put in a lot of work in the offseason to prepare for this season, and obviously that didn't happen, but I know it's going to make them stronger.  And at the end of the day, all five guys are moving on to higher education, which is great. They all have a plan in place and that's something I pride myself on, that each player is taken care of, whether they continue to play baseball or not.”

All five were hoping to play this season, but even if Sunday’s ceremony wasn’t how they envisioned it would be back in March, or even May before spring sports were canceled, but they still showed their gratitude for what turned out to be the next best sendoff, aside from being in game uniform one last time.

“They appreciated it, and I got a bunch of text messages thanking me for everything, it was awesome,” Mercado said. “The parents, you could tell they appreciated it as well. It was good to get everyone together one last time for the seniors. The community came out. It was cool.”

For Adorno and Gajda, their baseball careers will continue. Adorno will remain in the Hardware City and play at Central Connecticut State University next season, while Gajda will suit up for AIC.